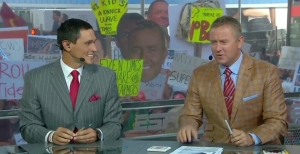 The status of Butch Jones as Tennessee’s head coach was among the talking points on ESPN’s “College GameDay” broadcast on Saturday morning.

Kirk Herbstreit mentioned the number of coaches in college football facing pressure from their respective fan bases early in the season.

Herbstreit theorized that the amount of money being paid to coaches and the impact of social media have helped create a “perfect storm” of criticism for coaches.

“Look at Butch Jones and what he’s been able to do at Tennessee,” Pollack said. “If it wasn’t for social media, do you think he’d be on the hot seat?”

Pollack concluded his thought with, “Probably not.”

Social media has played a big role in the criticism of Jones in the last week with many Tennessee fans voicing their displeasure with the Vols’ head coach.

It’s difficult to know exactly how secure Jones’s position as Tennessee’s head coach is just three games into the season. The Vols have a 2-1 record with nine games remaining, including a very important home game against SEC East rival Georgia on Sept. 30.

“It’s a long season,’’ Tennessee athletic director John Currie told WNML this week. “We’ve got a lot of work to do, obviously. But I appreciate the effort and work that all of our coaches and student-athletes are putting into it.”

One thing is clear: The Vols will need that work to lead to wins against their top SEC opponents soon. Otherwise, the pressure on Jones will only continue to rise.