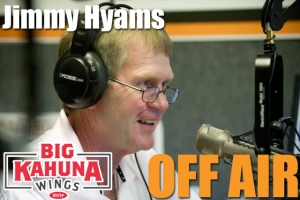 Davis made those comments in an Oct. 31 email to UT athletic director John Currie, obtained by Sports Radio WNML.

Davis told Currie that “I had always dreamed of coming back and being able to contribute to the continued success of the athletic program.’’

Davis said that working under Jones “has been one of the worst work experiences I have ever had.’’

Asked for comment, Jones issued this statement through football sports information director Zach Stipe: “I wish Antone Davis well and thank him for his work as Tennessee’s Vol For Life Coordinator.’’

Davis also said he had not received a merit raise despite having “outstanding performance reviews,’’ although he had been given UT-wide 1.5 to 3 percent raises. His salary now is about $69,000.

However, one source said Jones went to his administration a while back and, unbeknownst to Davis, asked for a raise for Davis. The request was denied.

Davis closed with this in his email: “I wish you and the men of the University of Tennessee football team nothing but success as you forge ahead in trying to drive the program toward its next national championship.’’

In another email Davis sent to Currie, Davis said he mentioned concerns to Currie as far back as Sept. 22 without Currie taking any action.

“I want you to know that I am not leaving Tennessee because I want to,’’ Davis wrote in the email. “I am leaving because I must. My biggest regret and fear is that I am leaving behind student-athletes and co-workers that may be subjected to the same treatment I have received.’’

Davis also wrote: “In closing, I deeply regret that things have been allowed to transpire, causing a high level of anxiety and other health issues thus creating my need to resign.’’

In an Oct. 31 email to Davis, Currie said: `While I am very sorry that you are leaving us, I am glad that you have been able to find a position you are excited about … ‘’

Currie said he had planned on expanding Davis’ role and “further synergizing your efforts to help our student-athletes with the Thornton Center and the upcoming VFLconnect program.’’

Currie added: “Antone, I appreciate your efforts on behalf of the athletics program and Volunteer student-athletes and look forward to staying in touch.’’

Davis, a former UT All-American offensive lineman, was the No. 8 overall pick in the 1991 NFL draft. He played seven seasons in the NFL.