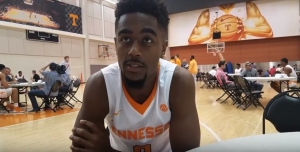 It’s hard to imagine Tennessee could have beaten Mississippi State on Friday night without a decisive rebounding advantage.

Tennessee survived a late rally by Mississippi State to win 62-59 to advance to play Arkansas in the semifinal round of the SEC Tournament.

The Vols struggled with their shot against Mississippi State, hitting only five of 20 3-point attempts and missing 11 of their 28 free throws. Tennessee also had 17 turnovers, which coach Rick Barnes wasn’t happy about after the game.

That’s why Tennessee’s rebounding – the Vols had a 50-33 advantage on the glass – was so important. Tennessee had 22 offensive rebounds and 22 second-chance points.

Former Ole Miss coach Andy Kennedy said on the SEC Network after the game the rebounding difference is why Tennessee won the game, and Barnes agreed.

Tennessee starting point guard Jordan Bone didn’t agree, at least until he was then told the Vols had 50 rebounds in the game.

.@JordanBone23 started to say the Vols didn’t have a great rebounding game tonight. Then I told him they had 50. pic.twitter.com/SAMSsujJpv

Tennessee’s matchup with Arkansas will take place Saturday afternoon following the other semifinal matchup between Alabama and Kentucky. Vol Network coverage will begin on Sports Radio WNML at 3.