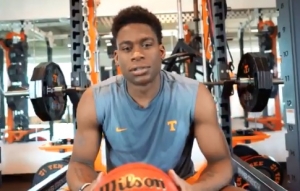 Virginia, Cincinnati and Arizona have better odds of winning the South Region, per Bovada. Ed Feng of The Power Rank said on Tuesday that Tennessee has about a 33 percent chance of beating Cincinnati if the two teams meet in the Sweet 16. That’s not too bad, considering that would mean the Vols are playing for only their second trip to the Elite Eight in school history

The Vols also have some momentum after a strong finish to the season, winning six of their final seven games.

But if you’re thinking about picking Tennessee to make a deep run in the tournament, the Vols have a message for you: don’t.

Watch the video released by The Players’ Tribune featuring forwards Kyle Alexander, Admiral Schofield and Grant Williams. There’s also an appearance from head coach Rick Barnes, who is ready to be turned up. Watch below.