At most universities, paying a buyout of $1.33 million to a chancellor who’s only been on the job for 16 months would be a big deal.

That $1.33 million is what UT agreed to pay Dr. Beverly Davenport on Tuesday after she was fired as the chancellor of the university last month.

Davenport had been set to move to a faculty position in the College of Communications, according to the school, but that was never a realistic solution after president Joe DiPietro decided to remove Davenport from her chancellor position.

So UT moves on and pays another former employee not to work. Davenport is only the latest person to receive a hefty payment to leave the school.

That doesn’t include the money Tennessee still owes former athletic director Dave Hart, whose contract ends in September, or former assistant football coaches who were let go along with Jones.

Tennessee was once known as “Wide Receiver U” because of its reputation for producing standout receivers on the football field. Tennessee’s recent activity has earned the school a new nickname: “Buyout U.”

Since 2005, Tennessee has paid out more than $26 million to former athletic directors and head football and basketball coaches. Look at this graphic from John Pennington at The Sports Source. 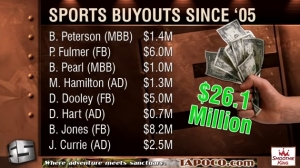 Perhaps if we weren’t so used to seeing Tennessee pay large buyouts, this latest seven-figure payment to Davenport would be a bigger deal.

Instead, it’s just another drop in Tennessee’s buyout bucket.