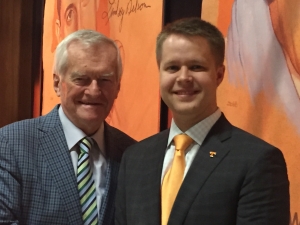 If you can believe it, I talked a lot as a kid.

More accurately, I asked a lot of questions. It must have been insufferable.

My mom had a really simple solution for my questions when she took me to Neyland Stadium. She brought her portable radio, tuned it to 107.7, put the headphones on my tiny, inquisitive head and said “These guys will answer all your questions.”

John Ward and Bill Anderson did answer all of my questions and then some, from that day in the late 1980s through that fateful January night in 1999 when my mom and I once again muted the TV and fired up the stereo in the house to hear John say “Touchdown Tennessee,” two final times before declaring that the National Champion was clad in the Big Orange.

I’ve only been star struck by two people in my life, John Ward and Skip Caray. I knocked over a small child running to get Caray’s autograph. But John was different. I saw him at every football and basketball game I worked over the years, but I could never formulate the words to tell him what a hero he was for me.

After all, years of his calls coming through my headphones had led to dreams of being a broadcaster and hours of sitting on the couch calling games of Madden and NCAA Football to myself.

Finally, I had to muster words. As the staff writer at UT, I received the assignment to interview John for a story in the basketball game program. Basketball SID Tom Satkoviak and I thought his perspective could add a great deal to a profile of Bernard King for the 40th anniversary of his debut at UT.

John had always been hesitant to be too involved in anything we were doing, always delivering the fallacy that “No one wants to hear from a has-been.” Nothing could have been further from the truth. But through Steve Early at the Vol Network, he agreed to a phone interview for the story. At the appointed time, I picked up the office phone and dialed. The answer came after the first ring.

I began to explain the story and he interrupted quickly.

“[Steve] explained to me what you wanted, go ahead with your questions, please.”

And it was fantastic.

Less than a year later, we met in person and I was able to formulate enough words to not sound like a blubbering idiot. I had spent the day following Rick Barnes around campus on his first day as Tennessee’s basketball coach. The final stop was in the Ray and Lucy Hand Digital Studio, where John was waiting for the new head coach. After Barnes finished recording some quick videos and departed, John sat down and told stories for about an hour. My written recap of Barnes’ day was officially on the backburner, I was sitting at a table listening to John Ward stories.

As a broadcaster, I get to play a very small part on the Vol Network as the voice of Tennessee softball. I can’t describe to you how much it meant all those years later to have my name attached to a Vol Network intro. But it really hit me at the end of the sixth inning of my first game. It wasn’t the music, it wasn’t the Vol Network mic flag on my crowd mic. It was a network commercial break where the famous voice began extolling the virtues of Natural Gas, as he did for so long on every broadcast.

I heard the first word and thought to myself “Holy %&$*, I’m on the Vol Network.” In a small way, we were connected and it meant everything to me.

Every broadcaster in this area wanted to enter the profession because of John. But most importantly, we learned from his style. A tinge of homer, but always respectful. Paint the picture accurately and descriptively, but do not use a paragraph when a sentence will do. Sometimes, the crowd noise tells the story. All of those are lessons, ones I am happy to reflect on every time I put on the headset.

Broadcasters of his day were often the only connection that most fans had to their team. TV broadcasts were few, and even in his final few seasons, some games were only available on the radio. But John Ward was all we needed as Tennessee fans. And we were blessed.