Ben Ingram of the Braves Radio Network and 680 The Fan broke down this year’s Hall of Fame Class.

The play-by-play broadcaster discussed PEDs in the Hall, Mariano Rivera’s unanimous selection and why Fred McGriff was once again left off the ballot.

For the past eight seasons, Ingram has worded on the Braves Radio Network as the pre and post game studio host while filling in for Jim Powell as the play-by-play broadcaster when absent. The former Southern League Broadcaster of the Year received a promotion this offseason and will be in the boot for a big chunk of Atlanta’s ballgames this upcoming season. Ingram is also a member of the 680 (The Fan) team and called the year’s Chick-Fil-A Peach Bowl.

Hear what Ben Ingram said in a chat with Eric Cain. 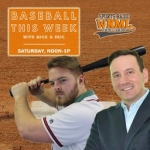