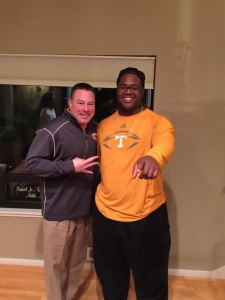 The NFL Scouting Combine is taking place in Indianapolis this week.

The SEC will have 53 players at the event, easily the most of any conference. None of them will represent the University of Tennessee.

Why is that the case? There are several reasons, but one main explanation comes from the 2015 class.

Tennessee’s 2015 class was ranked No. 4 in the country when it was signed, according to the composite ranking provided by 247Sports. When all the 2015 class were re-ranked by The Athletic, Tennessee’s class didn’t make the top 35.

That’s probably not a huge surprise considering Tennessee is coming off back-to-back seasons with a last-place finish in the SEC East.

So what happened? How could a class with so much promise deliver such disappointing results on the field?

Here’s a player-by-player look at the 2015 class to help explain why it failed to live up to the lofty expectations that were set four years ago.

DT Kahlil McKenzie – McKenzie was a regular contributor for Tennessee at defensive tackle, but he never reached an All-SEC level that was expected for the nation’s No. 2 defensive tackle. He likely would have been better off moving to the offensive line, which he agreed to do for the Kansas City Chiefs as a rookie in 2018.

DL Kyle Phillips – Phillips dealt with multiple injury issues during his first three seasons at Tennessee. He didn’t participate in spring practice until the spring before his senior season. A productive 2018 season will give him a chance to make an NFL team this fall.

RB Alvin Kamara – He more than lived up to the hype. Kamara, who was underutilized at times during his two seasons at Tennessee, is a star for the New Orleans Saints.

WR Preston Williams – Williams flashed signs of his potential, starting for the Vols when the 2016 season began before deciding to transfer midseason. He had a big junior season at Colorado State and is hoping to be drafted in the spring.

DT Shy Tuttle – Injuries kept Tuttle from ever reaching his full potential. Like Phillips, Tuttle never went through a spring practice until last year. He will still have a chance to play in the NFL in 2019 after having a solid final season at UT.

OL Drew Richmond – Richmond has started at both left and right tackle over the last three seasons, but he never lived up to the hype that accompanied him during the recruiting process. He has decided to transfer from Tennessee and plans to play his senior season elsewhere in the fall.

OL Jack Jones – Jones showed plenty of promise as a true freshman in 2015, but injuries caused his career to end early. Jones was forced to give up football during the 2017 season due to recurring neck and shoulder injuries.

LB Darrin Kirkland Jr. – The theme of injuries continues. After a productive freshman season in 2015, Kirkland suffered a serious ankle injury in Week 2 of the 2016 season. He never played at 100 percent the rest of the season, and he missed all of 2017 because of a knee injury. He returned to play in 2018 but didn’t seem to be at the same level physically as he was before the injuries. Kirkland has one more year of eligibility remaining.

WR Jauan Jennings – Jennings, who transitioned to receiver after playing quarterback in high school, has been a very productive player for Tennessee. He was a difference-maker at receiver during the 2016 season, which included his Hail Mary catch to beat Georgia in Athens. Jennings missed almost all of the 2017 season due to an elbow injury, but he returned to play a key role in the Vols’ offense last fall. He’ll be back for his senior season.

LB Quart’e Sapp – Sapp was a productive player at times for Tennessee, but guess what? He also suffered a major injury, tearing his ACL in the third game of the 2016 season. He returned to help Tennessee’s linebacker group the last two seasons and decided to declare for the NFL Draft in December.

DB Micah Abernathy – Abernathy was a productive player who held onto a starting role most of the last three seasons. Never known as a flashy player, Abernathy did his job at safety and was counted on as a solid leader.

QB Sheriron Jones – Jones served as a backup quarterback at Tennessee in 2015 and 2016 before decided to transfer ahead of the 2017 season. Jones served as New Mexico’s starting quarterback last fall, completing 54.5 percent of his passes for 1,417 yards with 13 touchdowns and 12 interceptions.

CB Justin Martin – Martin failed to make the immediate impact coaches hoped he would when he arrived from junior college. His role was up and down at Tennessee, with his biggest impact coming as a senior in the 2017 season. He currently plays for Memphis in the Alliance of American Football.

DL Andrew Butcher – Thought to be a potential impact player in a loaded defensive line class, Butcher never could overcome injuries at Tennessee. He joined Kennesaw State’s team before the 2018 season and registered 34 tackles in his first year with the Owls.

QB Quinten Dormady – Dormady served as Josh Dobbs’ backup during the 2015 and 2016 seasons before winning the starting position in 2017. He struggled to produce while also dealing with a shoulder injury. Dormady transferred to Houston for the 2018 season and has since moved on to Central Michigan, where he will have an opportunity to start as a fifth-year senior.

LB Darrell Taylor – Taylor arrived at Tennessee as a defensive end and has transitioned to outside linebacker in Jeremy Pruitt’s scheme. Taylor has flashed signs of the potential that coaches and teammates have so often discussed. The decision to return for his senior season should give Taylor a chance to break out in 2019.

OL Venzell Boulware – He started at times but mostly served as a backup at Tennessee. Boulware decided to leave the Vols in the middle of the 2017 season and transferred to Miami. After starting for the Hurricanes in 2018, he declared early for the NFL Draft and is hoping to be selected this spring. Boulware is a player Tennessee could have really used this past fall.

DL Quay Picou – Picou served as a backup defensive tackle for Tennessee before transferring to West Georgia to play his senior year in 2018. He registered 14 tackles in his final season.

RB John Kelly – Kelly was probably the Vols’ biggest overachiever in the 2015 class based on recruiting rankings. The three-star prospect was a productive backup in 2016 and one of the SEC’s best running backs in 2017 once he became the starter. He declared early for the draft and spent the 2018 season as a backup with the Los Angeles Rams.

LB Austin Smith – Smith is a player who has battled injury issues and position changes during his time at Tennessee. He’s never been able to find a consistent role in the Vols’ defense, and he’s currently in the NCAA transfer portal as he weighs his options for his senior season.

TE Kyle Oliver – Oliver’s Tennessee career ended before it really ever began. He was dismissed in the summer of 2015 for unspecified off-field issues. Oliver then went to a junior college before transferring to Memphis and then Tennessee State.

OL Chance Hall – Here’s another player whose career was riddled with injuries. He showed tremendous promise early in his time at Tennessee, but Hall had to deal with too many injuries to ever reach his potential. He gave it one more go this past fall, serving as a backup lineman for the Vols, before deciding recently to give up football.

DB Stephen Griffin – Griffin was a backup safety for Tennessee in 2015 and 2016 before he transferred to North Carolina State ahead of the 2017 season. He started six games for the Wolfpack last fall while recording 41 tackles, seventh best on the team.

CB Darell Miller – Miller ended up leaving Tennessee and transferring to play at Louisiana. He played for the Ragin’ Cajuns in 2017 before deciding to give up football to focus on his academics.

WR Vincent Perry – Perry left Tennessee’s program due to academic reasons and resurfaced as a signee with Tennessee State in 2018. He isn’t currently listed on TSU’s roster.

WR Jocquez Bruce – Bruce left Tennessee before his career in Knoxville began. He transferred to Middle Tennessee and has for the Blue Raiders played as a reserve wide receiver each of the last two seasons,

P Tommy Townsend – Townsend was beaten out by Trevor Daniel and transferred to Florida before the 2016 season. Townsend had a productive redshirt junior year for the Gators in 2018.

LS Riley Lovingood – Lovingood served as Tennessee’s starting long snapper for punts in 2016 and 2017 and represented UT at the SEC’s Student-Athlete Advisory Committee meetings in February.