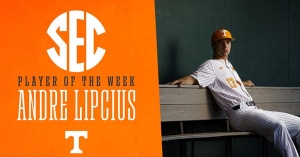 Lipcius is the third Tennessee player to earn a conference weekly award this season, and the first to earn player of the week honors. He joins teammates Zach Linginfelter and Garrett Stallings, who both garnered pitcher of the week accolades earlier this year.

The Williamsburg, Va., native is the first Vol to be named the conference player of the week in over two years. The last person to do it was current Cincinnati Reds’ outfielder Nick Senzel on May 23, 2016.

Lipcius batted .533 over four games last week, going 8-for-15 at the plate to lead UT to a 3-1 record with victories over Austin Peay and Florida. The junior slugger led the Vols in nearly every major statistical category for the week while helping Tennessee secure an important series win on the road at Florida. Six of his eight hits on the week came against the Gators, including a four-hit performance in Saturday’s 8-7 victory. Lipcius had two doubles, a home run, three RBI and scored two runs in the game, finishing a triple shy of the cycle. The four hits tied a career high.

Lipcius posted three multi-hit games for the week and hit home runs in wins on Tuesday and Saturday to increase his season total to 14, the most in a single season by a UT player since current Detroit Tigers slugger Christin Stewart had 15 in 2015.

With five runs batted in this week, Lipcius became the first Tennessee player since 2016 to have 50-plus RBI in a season when Senzel (59), Vincent Jackson (57) and Jordan Rodgers (56) all accomplished the feat. His 51 runs batted in are tied for eighth in the SEC entering the final week of the regular season.