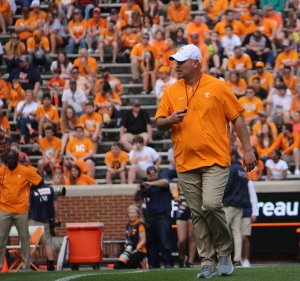 One reason for optimism that Tennessee will improve this year is the team’s increased level of competition.

Pruitt himself made it clear during the 2018 season that he needed more players. He has them now.

Do the Vols have enough to compete with the best teams in the country? We’ll find out this fall, but we at least know Tennessee is a deeper team that should have more competition on the field. That competition will begin next week camp opens.

Here are five position groups to watch next week to see how the competition plays out.

Freshmen Wanya Morris and Darnell Wright will challenge for playing time immediately. Morris, who enrolled for the spring semester, probably has a leg up on earning a starting spot on Dec. 31 against Georgia State. We should see both players this fall. Senior center Brandon Kennedy returns after tearing his ACL last September, and players like K’Rojhn Calbert and Jerome Carvin will push veterans who have more playing experience. It will be up to fourth-year players Ryan Johnson, Nathan Niehaus and Marcus Tatum to earn a spot. The same goes for second-year lineman Jahmir Johnson.

The conversation remains in the trenches. It’s a new look defenseive line because of the seniors who departed after last season. Senior Emmit Gooden and junior Matthew Butler will be asked to help lead the way. Will Michigan transfer Aubrey Solomon be granted immediate eligibility? That is a big question heading into fall camp, but either way, he will be someone to watch on Day One of practice. Then what happens with the young players and newcomers? Watch for guys like Greg Emerson, Kurott Garland, John Mincey, and Kingston Harris along with junior college transfers Savion Williams and Darel Middleton. They will all push for playing time, which is up for grabs for everyone.

Here’s what we know: senior Nigel Warrior will start at safety and sophomores Alontae Taylor and Bryce Thompson will likely start and play a lot at cornerback. That leaves plenty of questions. Will Baylen Buchanan be fully healthy? Tennessee will need his senior experience on the field. Is Shawn Shamburger ready to be a consistent contributor? Tennessee needs him. And who will emerge among young or less experienced players, including juniors Theo Jackson and Kenneth George, sophomores Trevon Flowers and Cheyenne Labruzza and freshmen Jaylen McCollough, Warren Burrell and Tyus Fields. The defensive backfield has a lot of names; will there be enough playmakers?

Ty Chandler should be the starter and the Vols’ main option out of the backfield, but he can’t carry the load by himself. Junior Tim Jordan has shown the ability to make plays in the past. Can he continue to do that? Then there’s sophomore Jeremy Banks. Tennessee’s staff loves his physical style and the way he approaches the game. But if Banks can’t hold onto the football, he won’t be on the field. Freshman Eric Gray is someone to watch. The U.S. Army All-American was a big-time get for Tennessee in the 2019 class, and new offensive coordinator Jim Chaney should be excited about trying to work his playmaking into the offense. Of course, this group will need help up front.

Wait. Jarrett Guarantano is locked into the starting position, right? Yes, he is, but what about the guys behind him? Guarantano is the only scholarship quarterback on Tennessee’s roster to have ever taken a snap in college. The battle to be his backup will be between redshirt freshman J.T. Shrout and true freshman Brian Maurer, who enrolled in January and took part in spring practice. Both players have talent and upside, but neither player has shown he’s ready to go help Tennessee win a big game if Guarantano were to go down. Plenty of eyes will be on Maurer and Shrout when fall camp opens next week.