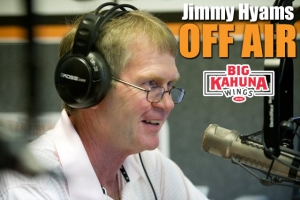 Tennessee had moments Saturday against the top-ranked team in the country in which it came oh-so-close.

But the victory cigars were once again smoked in the Alabama locker room.

In a game that featured injured starting quarterbacks, end zone turnovers and atrocious officiating, No. 1 Alabama (7-0) survived 35-13 against a gallant Tennessee team (2-5).

The Crimson Tide didn’t put the game away until Trevon Diggs returned a Jarrett Guarantano fumble 100 yards for a touchdown with 7:21 left to account for the final score.

A Tennessee touchdown would have cut the margin to 28-20.

The play that turned the Tide against Tennessee was the Guarantano fumble from the one-foot line.

If not for a terrible spot three plays earlier, the Vols might have already scored.

Lined up in the wildcat at the 2-yard line, running back Tim Jordan was stuffed at the 2. Yet, the officials inexplicably placed the ball at the 3. Jordan ran for a yard and Quavaris Crouch powered to the six-inch line.

Crouch would have scored if not for the ref’s earlier miscue.

Then came another egregious error. Guarantano tried to dive over the top on a fourth-and-inches quarterback sneak. He didn’t have a chance. The ball popped out, rolled into the end zone and Diggs took it the distance.

A furious UT coach Jeremy Pruitt chewed out Guarantano, briefly grabbed him by the face mask, then benched the redshirt junior.

ESPN announcers said UT had called a run play and noted that left guard Trey Smith pulled to make a kick-out block, as if the run was called to the left side.

Asked if a sneak was the call, Pruitt said: “We didn’t have a call. I don’t know why we went fast to the line of scrimmage … There was no reason to rush.’’

So UT didn’t even call a play? Guarantano took it on his own to run a sneak? Really?

That’s hard to believe. But if true, no wonder Pruitt was so ticked.

Few thought UT would even be in position to scare Alabama late in the game. The Vols were a 35-point underdog and showed no signs of competing against an elite team.

Beating an average Mississippi State is one thing.

Taking on the Mighty Tide is another.

Tennessee started out reasonably well as quarterback Brian Maurer, who suffered a concussion the week before, was cleared to play and scored on a sneak to tie the game at 7-7 in the first quarter. The score was set up by Nigel Warrior’s 59-yard interception return of a Tua Tagovailoa errant throw.

“I just remember the tight end running across the field and (cornerback) Bryce (Thompson) took him,’’ Warrior said. “Tua threw it right to me. I started running out of gas (on the return).’’

Maurer was knocked out of the game late in the first quarter when his head banged into the knee of offensive lineman Darnell Wright. A targeting call against Alabama was reversed when replays showed Shane Lee shoved Maurer and didn’t make helmet-to-helmet contact.

On the drive in which Maurer exited, the Vols drove for a field goal to cut Alabama’s lead to 14-10.

After Bama went ahead 21-10, Tagovailoa was sacked by Greg Emerson and suffered what Saban called a high ankle sprain that will cause the QB to miss a game or two.

Tua’s absence dramatically altered Alabama’s offense. The Tide went from a pass-first philosophy to being run oriented. Najee Harris had 105 yards on 21 carries and the Tide had just 78 passing yards after Tua (11 of 12 for 155 yards) left. The Tide was averaging 336 passing yards a game but settled for 233 against the Vols.

Tennessee held Alabama to 373 total yards – 163 below it’s average – and 28 points – 23 below its average. But the Vols managed just 231 yards and shot themselves in the foot when approaching the end zone.

A Jauan Jennings touchdown run was nullified due to holding. A pass play at the Bama 10 drew three flags. Jordan surprised Bama in the wildcat but officials stopped the play for no apparent reason, allowing Bama to set up its defense, drawing the ire of Pruitt. And Bama ran a pass play in one second toward the end of the first half before attempting a field goal.

Tennessee was assessed 13 penalties in all.

“Anytime you play Alabama, you can’t do anything like that,’’ Pruitt said. “Every time we got close to the end zone, officials started throwing flags. if we’re guilty of it, we ought not do it. If we’re not guilty, then they need to quit throwing flags.’’

Pruitt has a point. The officials made so many questionable calls, they opened the door to conspiracy theorists who believe refs favor the Tide.

A call that hurt UT greatly came early in the third quarter. Down 21-13, UT’s defense forced its second three-and-out. But linebacker Darrell Taylor was called for roughing the passer when he lightly pushed quarterback Mac Jones – whom Taylor had knocked to the ground — after an incompletion. Taylor was on top of Jones when the shove occurred.

Pruitt said the defeat was a “little bit frustrating. Our kids played hard, really hard. We played together. But you can’t make critical errors.’’

Tennessee made too many to beat Alabama, but Pruitt saw a light at the end of the tunnel.

“I look forward to playing these guys (Alabama) with 85.’’