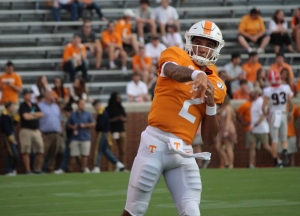 Be careful with the idea of giving up on Tennessee quarterback Jarrett Guarantano.

Before I continue, we can all agree on one thing: Guarantano’s season has been a disappointment. That’s according to the expectations set by Tennessee’s coaches, fans and Guarantano himself.

Everyone surely agrees on this, too: the goal line play against Alabama was a disaster. He should have handed the ball to Quavaris Crouch, who would have had a much better chance of scoring than Guarantano did when he attempted the sneak without his teammates appearing to know.

Guarantano’s mistake on fourth down has led many Tennessee fans to renounce their support of the fourth year junior. The frustration is understandable, but fans might want to rethink the idea of moving on from Guarantano.

With Brian Maurer’s status in question after he suffered two concussions in eight days, Tennessee will likely need Guarantano to start this week against South Carolina, a team that has won three straight games against the Vols.

Guarantano has made plenty of mistakes this season. The goal line error was the most egregious. But is JT Shrout, a redshirt freshman with very limited playing experience, ready to help lead Tennessee to victory against South Carolina and coach Will Muschamp’s defense?

Maybe, but plenty of doubt exists – even within Tennessee’s coaching staff. And let’s say coach Jeremy Pruitt decides to give Shrout a shot this week just because. If Shrout were injured or ineffective, Pruitt would have no other choice but to play Guarantano. (This is where I dismiss the Jauan Jennings full-time quarterback discussion.)

“But Tennessee can’t win with Guarantano,” you might reply.

Not so fast. Guarantano has proven he can help Tennessee win; it happened just two weeks ago when he relieved an injured Maurer against Mississippi State.

“We didn’t ask (Guarantano) to do a whole lot,” Pruitt said after the win. “He did a good job.”

And that’s the job Tennessee should ask Guarantano to do if he plays against South Carolina.

The Gamecocks’ defense ranks ninth in the SEC against the run. Tennessee, which has had success running the ball with Tim Jordan and Ty Chandler in recent weeks, should focus on the ground game and put Guarantano in a position where he doesn’t have to do too much. The decision-making will be in the hands of the coaches, not the quarterback.

If that happens, Tennessee can beat South Carolina. It’s a game the Vols almost have to win. A loss would put Tennessee at six losses on the season and require a perfect November.

Could Tennessee go 4-0 in the final month of the season? I suppose, but keep in mind that Tennessee hasn’t won four consecutive games since its 11-game winning streak was snapped by Texas A&M more than three years ago.

It’s a shame Maurer, who’s provided a legitimate spark to Tennessee’s offense, likely won’t be available this week. The reality is he probably shouldn’t have played last week against Alabama after suffering a concussion seven days earlier.

Maurer did play against Alabama, however, and now Tennessee is preparing as if he won’t be able to go against South Carolina. That means Pruitt and his offensive coaches have to look to the next best option.