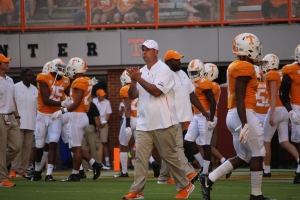 There will be a number of factors that matter when Tennessee plays South Carolina at Neyland Stadium on Saturday.

Tennessee needs to run the ball; the Vols need to eliminate penalties; quarterback play needs to be better. All of that will be very important.

Nothing will matter more than the turnover battle. Just look at the results for both Tennessee and South Carolina this season.

Tennessee has won the turnover battle in one game against FBS teams this season. That was against Mississippi State, the only FBS team Tennessee has beaten.

Can one of these teams lose the turnover battle and win the game? Sure, it could happen, and there’s a chance the two teams end up equal in the turnover category, of course.

But if one team walks away with an advantage in takeaways, expect that team to walk out of Neyland Stadium with a win.

You can bet on Jeremy Pruitt and Will Muschamp reminding their teams of that plenty of times this week.