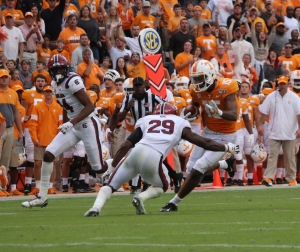 Tennessee fans are going to remember the month of November.

No matter what happens in the Vols’ final four games of the season, the result will leave a lasting impression on how fans will look back at the 2019 season.

Tennessee has made some really impressive strides since a dreadful start to the season.

After losing the first two games to Georgia State and BYU and losing by 31 points at Florida, Tennessee’s season looked like it was destined for failure. The Vols entered October on a five-game losing streak to FBS teams going back to last season.

But Tennessee managed to turn things around in October. Losses to Georgia and Alabama were far more respectable than what we had seen when Tennessee traveled to Florida, and wins against Mississippi State and South Carolina — two teams favored to beat the Vols — have breathed some new life into Tennessee’s season.

Now Tennessee enters the final stretch against four teams who are all beatable. None of the games are guaranteed wins for Tennessee, which everyone in the program needs to remember, but their weaknesses and Tennessee’s growth provide plenty of opportunities.

Just think about the development Tennessee has made this season.

Quarterback play has improved; Jauan Jennings has put together a memorable run for fans to talk about for years; play along the line of scrimmage has become more reliable; coaches and players appear to truly be on the same page for the first time since Jeremy Pruitt took over the program.

The month of November starts with a home game this weekend against UAB. After that, the Vols have two road games at Kentucky and Missouri (with an off week in between) before finishing the season at home against Vanderbilt.

A record of 3-1 in November will allow fans to remember a positive second half of the season that led Tennessee back to a bowl game. A 2-2 record or worse would bring up unpleasant memories of losses to Georgia State and BYU, something most everyone associated with Tennessee is ready to forget.