The United States Geological Survey recorded a 3.8 magnitude earthquake in Campbell County.  USGS reports the quake was centered near LaFollette and struck about 2:11 Monday afternoon.  There aren’t any reports of injuries or damage, however many people across the region posted on social media that they felt the quake. 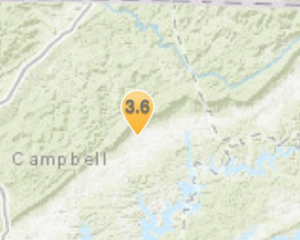 Earthquakes in this part of Tennessee are very common, though many are so small people don’t feel them.  The area is located along the East Tennessee Seismic Zone, which stretches from northeastern Alabama to southwestern Virginia.  It’s understood to be one of the most active quake zones in the United States.