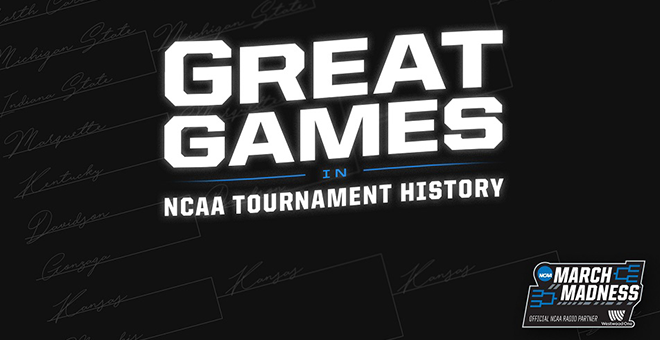 99.1 The Sports Animal, via Westwood One, the official network radio partner of the NCAA, will rerun 15 Great Games in NCAA Tournament History to help college basketball fans experience the madness of March, after the NCAA cancelled this year’s winter and spring championships, including March Madness, due to the evolving COVID-19 public health threat.

The three-week run of games will begin Thursday, March 19, at 8 p.m. ET, with the 1979 NCAA championship game between Michigan State and Indiana State, which starred Magic Johnson and Larry Bird. At halftime, Westwood One will air an interview with Johnson and Bird discussing the game and their long rivalry. The special series will conclude with an encore presentation of last year’s NCAA championship game between Virginia and Texas Tech on Monday, April 6, at 8 p.m. ET.

Each game will feature play-by-play as it aired originally, edited down to minimize interruptions, and will include interviews and additional perspective from some of the players and coaches involved in the contest. Kevin Kugler, Jason Horowitz, or Ryan Radtke will host these games, which also include the 1982 NCAA championship game when Michael Jordan hit the game-winning shot for North Carolina, Villanova’s 1985 upset over Georgetown, Davidson’s 2008 victory over Gonzaga when Steph Curry scored 40 points, and the historic 2018 first-round matchup when UMBC became the first #16 seed to beat a #1 seed (Virginia).

FM 99.1 and AM 990 in Knoxville, streaming here at 991TheSportsAnimal.com, the free WNML Sports Animal app and via TuneIn.com.

College basketball’s most outstanding player will be crowned on Tuesday.

Josh and Cainer go over some Tennessee football notes.

Get the 2020 East Tennessee Golf Card today to get the best golf for the best rate in 2020!