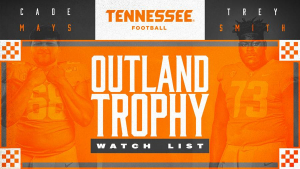 Offensive linemen Trey Smith and Cade Mays were among the 85 players named to the watch list for the 2020 Outland Trophy for the nation’s top interior lineman, while sophomore linebacker Henry To’o To’o was one of 98 defensive players under consideration for the 2020 Bronko Nagurski Trophy, as announced by The Football Writers Association of America.

Smith is coming off a dominant junior campaign in which he helped lead the Vols to six consecutive victories to end the season, including a thrilling comeback win over Indiana in the TaxSlayer Gator Bowl. He was one of eight SEC players named to the first team, the most of any conference.

The Jackson, Tennessee, native received All-SEC first-team accolades from the league’s coaches and media after starting 12 games in 2019.

Smith’s incredible return to football as well as his impactful work off the field and in the community earned him the inaugural Fritz Pollard Trophy and the 2019 Jason Witten Collegiate Man of the Year Award. During the offseason, Smith elected to forgo the NFL Draft and return to school for his senior year.

With Tuesday’s announcement, Smith added to an already growing list of preseason recognition for the 2020 season that includes honors from the Walter Camp Foundation as well as College Football News and Street & Smith magazines. Smith and Mays both earned preseason honors from Athlon, Phil Steele and Sporting News magazines.

Mays, who will be a junior this season, transferred to UT from Georgia in the offseason after playing a key part on the Bulldogs’ offensive line the past two years, playing in 25 games while making 18 starts.

Mays was a FWAA Freshman All-American and SEC All-Freshman team selection in 2018. The junior showed his versatility last season, starting at least one game at every position along the offensive line except for center, while helping lead the Bulldogs to a Sugar Bowl victory over Baylor.

Smith and Mays will be part of Tennessee’s talented offensive line that has been rated among the best in the nation by SEC Network analyst Cole Cubelic.

The recipient of the 75th Outland Trophy will be announced in early December. The official presentation to the winner will be made in Omaha, Nebraska, at the Outland Trophy Awards Dinner and produced by the Greater Omaha Sports Committee, scheduled for Jan. 13, 2021.

The complete Outland Trophy Watch List can be seen HERE.

To’o To’o is one of 15 SEC players to be named to the Nagurski Trophy watch list and among 30 other linebackers on the docket. The Sacramento, California, native is coming off an impressive freshman season where he recorded 72 tackles after playing in all 13 games while making 12 starts. He finished second on the team in tackles while ranking second among SEC freshmen and fourth among FBS freshmen.

A 2020 preseason first-team All-SEC selection by Phil Steele, To’o To’o helped lead the Vols during a six-game winning streak to close the 2019 season, including a game-high eight-tackle performance in a victory over Indiana in the TaxSlayer Gator Bowl.

Players may be added or removed from the watch list during the course of the season. As in previous years, the FWAA will announce a National Defensive Player of the Week each Tuesday this season. If not already on the watch list, each week’s honored player will be added at that time. The FWAA and the Charlotte Touchdown Club will announce five finalists for the 2020 Bronko Nagurski Trophy.

The winner of the 2020 Bronko Nagurski Trophy as the National Defensive Player of the Year will be chosen from those five finalists. The FWAA All-America Committee, after voting input from the association’s full membership, selects a 26-man All-America Team and eventually the Nagurski Trophy finalists. Committee members, by individual ballot, select the winner they regard as the best defensive player in college football.

How does the SEC look after the NBA Draft deadline?

I’ve started a SEC football series here on my blog called “SEC in 3V” with the three Vs standing for Vinny’s Virtual View.

Fast-growing sport has many followers

Listen to SportsTalk this week for Sports Fix at 6 for your chance to win $50 to 865 Axe Throwing!

Big Ticket is back for the 2020 season! 99.1 The Sports Animal is giving one lucky listener a huge Tennessee season ticket package for the 2020 – 2021 season. Listen to find out how you can win! Presented by Food City & BodyArmor.