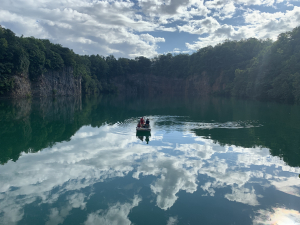 Knoxville Police are working to notify next of kin after a drowning at the Fort Dickerson Quarry Sunday night.

Officials say the man was swimming with friends when he jumped into the water from the West side of the quarry and never resurfaced.

Teams recovered the man’s body around 9:45 Tuesday morning. The body is being sent to the Regional Forensic Center for autopsy.

Crews are still searching Fort Dickerson Quarry for the body of a man.

According to reports, a group was swimming at the quarry on Sunday evening while also jumping into the water off of nearby rocks and ledges. Witnesses say when the man jumped into the water, he never came back up.

Authorities arrived to the quarry around 8:00 Sunday night and searched until roughly 11:00. Crews returned Monday morning with sonar equipment and searched throughout the day. As of late Monday afternoon, a body has not been found.

This is the second time this August that authorities had to use sonar equipment to try to find a drowning victim at Fort Dickerson Quarry.