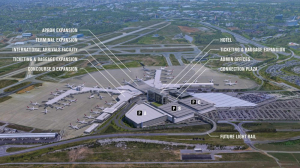 Nashville International Airport will split into two terminals while it enters an extended phase of construction.

After construction finishes in 2023, the expanded central lobby will include a bigger central security checkpoint, a new concessions marketplace, a pedestrian bridge connecting to a terminal garage, a new International Arrivals Facility and a new look.

The Big 12 dug itself a deeper hole, the Big Ten had a major officiating blunder and Georgia looked rough despite debuting a new quarterback.

Another great game by Guarantano would help

Listen to SportsTalk this week for Sports Fix at 6 for your chance to win $25 to Breakout Games Knoxville!