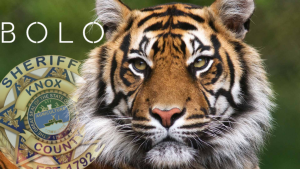 The hunt is on for a tiger in South and East Knoxville. Knox County Sheriff Tom Spangler says an off-duty officer spotted the animal near the Forks of the River Wildlife Management Area Wednesday night.

The deputy said the animal appeared to be full-grown. There’s been sightings Thursday morning around Governor John Sevier Highway and Thorngrove Pike.

Several agencies are involved in the search including KPD, KCSO, Animal Control and the TWRA. Officials say a trap has been set and if the tiger is caught it will be taken to Tiger Haven, a Big Cat Rescue in Roane County.

At this point, officials are not sure where the tiger came from. Zoo Knoxville has confirmed it’s not one of theirs.

If you spot the animal you’re urged to call 911 … or if you’re missing one you should reach out as well.