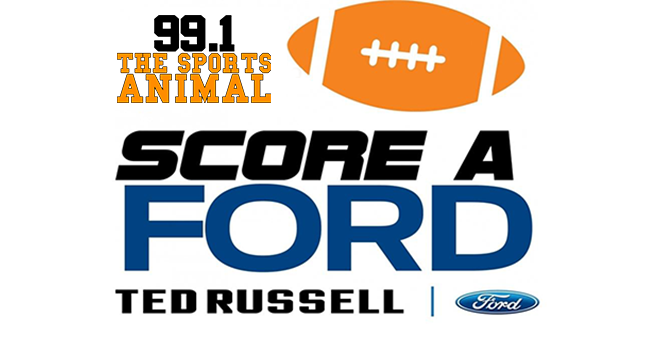 Do you think you can guess the exact score of a UT Football Game? Listen to 99.1 The Sports Animal for your chance to Score a Ford from Ted Russell Ford!

On 99.1 The Sports Animal, a cue to call in will play once per show Monday – Friday and one caller will give their guess at the exact final score for Saturday’s UT Football Game. On Friday afternoon, The Sports Animal will combine all guesses from the week and will randomly select one name from the week’s guesses to be the chosen score prediction.

If the score of that guess is 100% accurate, that person would win the F-150 pick-up from Ted Russell Ford!

The selected score will also receive a free oil change from Ted Russell Ford and $50 to Phoenix Conversions!

Listen each day for your cue to call and be entered for your chance to win!

Thank you to our Score A Ford sponsors: