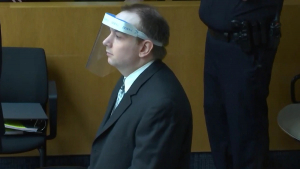 The jury says guilty on all counts in the murder trial of Joel Michael Guy Jr. Guy was found guilty of murdering and dismembering his parents at their Knox County home in 2016.

The four-day trial contained more than 700 pieces of evidence and over 2 dozen witnesses. Sentencing will come at a later date, but the conviction carries a mandatory life-sentence.

The Knox County trial continues Tuesday for the man accused of killing and dismembering his parents. Our TV Partner WVLT News was in the courtroom Monday. The Guy family was found murdered during the 2016 Thanksgiving weekend.

Prosecutors argued Joel Guy Jr. murdered his parents for money. The couple was retiring and were about to cut him off. Guy was named a beneficiary of his mother’s life insurance policy.

Investigators say Joel Guy Sr. and Lisa Guy were stabbed more than 30 times. Parts of their bodies were spread across multiple rooms of the home. Prosecutors say Guy covered his parents’ remains in a corrosive substance and, “left them to liquify into some sort of diabolical stew of human remains.”

Prosecutors also shared excerpts from a notebook which included a to-do list of getting knives. They said such acts could be considered premeditation.

The family met at Joel Sr. and Lisa’s home for the Thanksgiving Holiday. One of Guy’s sisters said, Joel Guy Jr. was acting strangely. Michelle Tyler said Joel was talking to her and her family which was odd. Tyler said, “I’m not sure Joel Michael Jr. knew my kids names and for him to talk to them was odd.”