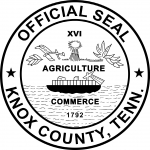 Two officials are no longer with the Knox County Government after allegations of wrongdoing. Knox County Mayor Glenn Jacobs accepted the resignation of his Chief of Staff Bryan Hair and dismissed Senior Director of Parks and Recreation Paul White. A release says White declined the opportunity to resign.

The Comptroller’s Office is investigating allegations of wrongdoing by the two men and they were placed on leave last week. Hair made a statement last week saying he borrowed a golf cart from the Parks Department in May to help his wife get around, but kept it through the summer.

In a statement released Monday, Mayor Jacobs says, “Ethics are not ambiguous, and it is important that Knox County be above reproach.” He encouraged all parties involved to cooperate with the Comptroller’s investigation. Mayor Jacobs says he has implemented changes to some departmental level procedures and oversight.

The Big 12 dug itself a deeper hole, the Big Ten had a major officiating blunder and Georgia looked rough despite debuting a new quarterback.

Another great game by Guarantano would help

Listen to SportsTalk this week for Sports Fix at 6 for your chance to win $25 to Breakout Games Knoxville!