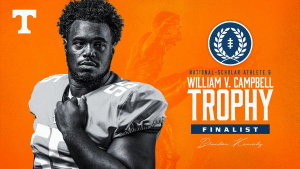 IRVING, Texas – For the seventh time in program history, Tennessee football has produced a National Football Foundation National-Scholar Athlete as senior graduate center Brandon Kennedy was selected as one of 12 finalists for the William V. Campbell Trophy, the NFF and College Hall of Fame announced Thursday.

Kennedy and the 11 other finalists will each receive $18,000 postgraduate scholarships as members of the 2020 NFF National Scholar-Athlete Class. Later this year, one member of the class will be declared the winner of the 31st William V. Campbell Trophy® Presented by Mazda and have his postgraduate scholarship increased to $25,000. The trophy goes to college football’s most outstanding scholar-athlete. The finalists were selected from 199 semifinalists nationwide among all NCAA divisions.

“It’s a tremendous honor to be a part of this elite fraternity as a National Football Foundation National Scholar-Athlete,” Kennedy said. “Coming to college in 2015 to now getting three degrees, it was a challenge but worth it every step of the way. It’s something I worked really hard at. I am just very proud to represent the University of Tennessee and our team. I am grateful to the National Football Foundation Awards Committee for selecting me as part of this great class.”

Kennedy is the first Vol to be named an NFF National-Scholar Athlete since Michael Munoz in 2004. Munoz went on the capture the Campbell Trophy, seven years after Peyton Manning won the award. Kennedy was one of only three Power 5 student-athletes to earn the honor this season, joining Texas quarterback Sam Ehlinger and Washington defensive back Elijah Molden.

“Brandon is the epitome of what it means to be a student-athlete,” Tennessee head coach Jeremy Pruitt said. “His leadership on and off the field have been invaluable to our program. I am excited that his hard work has been rewarded with the prestigious honor of being a Campbell Trophy finalist.”

Currently working on his second master’s degree, Kennedy has started 19 consecutive games for the Vols at center and serves as a team leader. A grad transfer, Kennedy earned his bachelor’s degree in recreation and sport management from the University of Alabama in just three years with a 3.55 GPA.

After earning a master’s degree from Tennessee in sports psychology and motor behavior in Dec. 2019, he is currently working on a second master’s degree in agricultural leadership, education and communications. The 2019 Academic All-District selection and two-time SEC Academic Honor Roll member has maintained a 3.86 cumulative GPA during his postgraduate studies at Tennessee.

An example off the field, Kennedy has volunteered for the Humane Society and the Special Olympics Winter Games. An annual participant in Read Across America events, the Wetumpka, Alabama, native has also volunteered for the Make a Difference Foundation.

Submitted by their schools, which are limited to one nominee each, candidates for the Campbell Trophy® Presented by Mazda must be a senior or graduate student in their final year of playing eligibility, have a GPA of at least 3.2 on a 4.0 scale, have outstanding football ability as a first team player or significant contributor and have demonstrated strong leadership and citizenship.

Launched in 1959, the NFF National Scholar-Athlete Awards Presented by Fidelity Investments celebrate their 62nd year in 2020. The awards were the first initiative in history to grant postgraduate scholarships based on both a player’s academic and athletic accomplishments.