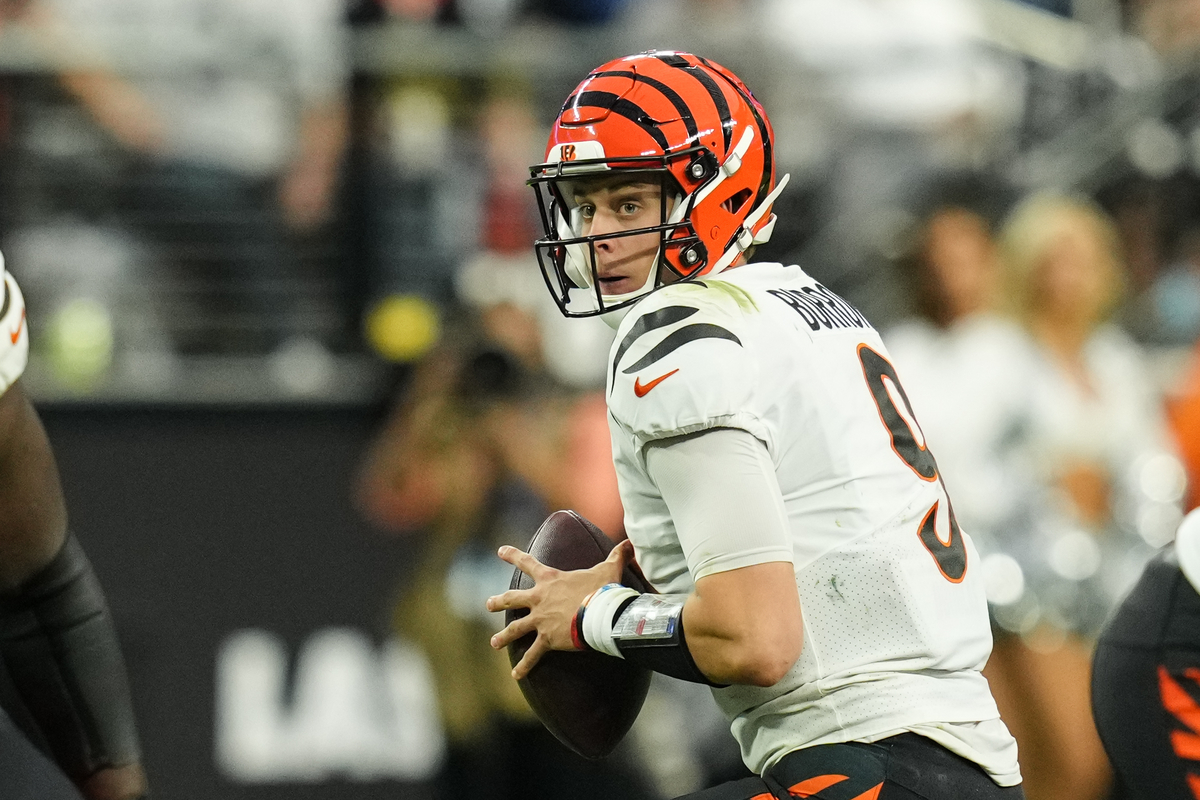 Below are my Conference Championship Games predictions, straight-up and against the spread. You’ll also see the full schedule of games and some tremendous notes on the games, teams and players provided by NFL Communications.

The Championship schedule for Sunday, January 30:

A grim reaper in a grim situation, a “Love of the Game” pass pattern, a trap handoff to a wide receiver on a snow-covered field, and a prophetic rookie kicker named Money Mac.

Tinseltown could not have written a more exciting screenplay to get the NFL to this point.

Welcome to the Championship round of the 2021 playoffs.

FROM LAST PLACE TO CONFERENCE CHAMPIONSHIP: NFL teams have a remarkable record of resiliency. Over the past 13 seasons (2009-21), five teams have gone from last place in their divisions to their conference Championship Games the following year.

The seasons in which multiple teams advanced to their conference Championship Games the year after finishing last or tied for last place in their divisions since 1970:

For a 17th consecutive season, the NFL will have a new Super Bowl champion, extending the longest streak without a repeat winner in league history. The last team to win consecutive Super Bowls was the 2003-04 New England Patriots.

In fact, four of the last 10 teams that played in the Super Bowl – the 2020 Tampa Bay Buccaneers, 2019 San Francisco 49ers, 2017 Philadelphia Eagles and 2016 Atlanta Falcons – reached that pinnacle after missing the playoffs the prior season.

REMATCHES: Each Championship contest is a rematch of games that took place in the final two weeks of the regular season. The 49ers defeated the Rams in overtime, 27-24, in Week 18. The Bengals defeated the Chiefs, 34-31, in Week 17. San Francisco also earned a 31-10 win over Los Angeles at Levi’s Stadium in Week 10.

WILD-CARD WISDOM: Last week, San Francisco was the only non-division champion to win in the Divisional playoffs. For a third consecutive season, the NFL has a team in a Championship Game that did not win its division, including Tampa Bay in 2020 and Tennessee in 2019. Seven teams, including the Buccaneers last season, have won the Super Bowl as a Wild Card team.

STELLAR CHAMPIONSHIP QUARTERBACKS: A glance at the starting quarterbacks for this weekend:

Championship Weekend also features starting quarterbacks with two of the highest winning percentages among players who began their careers in the Super Bowl era, including the postseason (minimum 50 starts). Kansas City’s PATRICK MAHOMES ranks first among those quarterbacks with a career 57-15 record (.792), including the postseason. San Francisco’s JIMMY GAROPPOLO (37-15, .712) ranks fifth.

The starting quarterbacks with the highest winning percentages, including the postseason, among players who began their careers in the Super Bowl era (minimum 50 starts):

A LOOK BACK ON THAT INCREDIBLE DIVISIONAL WEEKEND: A few significant notes from the most exciting Divisional playoff weekend in NFL history:

RAMS IN RARE COMPANY: The Rams are hosting the Championship as the NFC’s No. 4 seed. Since 1990, when the NFL expanded the playoff field to six teams in each conference, only one other team has hosted a conference Championship Game as a No. 4 seed: The 2008 ARIZONA CARDINALS, who defeated Philadelphia in the NFC title game to advance to Super Bowl XLIII.

DON’T DISCOUNT LOWER-SEEDED TEAMS: Since the 2005 Steelers won Super Bowl XL, seven teams have advanced to their conference Championship Games as a No. 6 seed, including the SAN FRANCISCO 49ERS this year. The list includes the 2008 Eagles, 2008 Ravens, 2010 Jets, 2019 Titans and Super Bowl XLV champion Packers in 2010.

SUPER BOWL PIPELINE: Since the 49ers advanced to Super Bowl XLVIII in the 2012 season, the NFC West has produced five of the previous nine NFC champions. After the 49ers or Rams win on Sunday, six NFC West teams will have advanced to the Super Bowl in 10 seasons, including three in the past four years (the Rams in 2018, 49ers in 2019 and Sunday’s winning team).

A look at the AFC and NFC Championship Games:

With Cincinnati and San Francisco, this marks the fifth year since 1970 in which multiple teams have advanced to their conference Championship Games the year after finishing in last or tied for last place in their divisions.

If either team wins this weekend, it will become the fifth team to advance to the Super Bowl the season after finishing in last place in its division since 2000.

The teams to appear in the Super Bowl the season after finishing in last place in their division since 2000:

CHAMPIONSHIP COACHES: Each of the four head coaches remaining in the 2021 postseason can cement themselves in NFL history with victories on Sunday.

In the AFC, Kansas City’s ANDY REID became the fifth head coach in league history to guide his team to at least four consecutive Championship Games. He is aiming to advance to his fourth Super Bowl as a head coach, and third with Kansas City. Overall, Reid has 19 postseason wins, tied with Pro Football Hall of Famer DON SHULA for the third-most in league history.

With a win on Sunday, Reid will tie Pro Football Hall of Famer TOM LANDRY (20 wins) for the second-most postseason wins by a head coach all-time. Only BILL BELICHICK (31) has more.

The head coaches with the most career postseason wins in NFL history:

Cincinnati’s ZAC TAYLOR is looking to become the sixth individual in league history to win each of his first three career postseason games as an NFL head coach and the first since DOUG PEDERSON in 2017.

In the NFC, both San Francisco’s KYLE SHANAHAN, who brought the 49ers to Super Bowl LIV in 2019, and Los Angeles’ SEAN MCVAY, who took the Rams to Super Bowl LIII in 2018, are looking to advance to their second Super Bowls as a head coach.

Each coach was hired by his current club in 2017 and the winner of the NFC Championship on Sunday will become the fifth individual in league history to advance to two Super Bowls within his first five seasons as an NFL head coach.

The individuals to advance to two Super Bowls within their first five seasons as a head coach in NFL history:

KANSAS CITY OF CHAMPIONS: The KANSAS CITY CHIEFS are the first team in league history to host four consecutive Championship Games. With a win on Sunday, they would become the fourth team all-time to advance to three-or-more consecutive Super Bowls.

The teams to appear in at least three consecutive Super Bowls in NFL history:

Quarterback PATRICK MAHOMES led the Chiefs to each of the past two Super Bowls and with a win on Sunday can become the 13th quarterback all-time to start in three-or-more Super Bowls, and the sixth to do so before turning 30 years old. Mahomes, who will be 26 years and 149 days old on the day of Super Bowl LVI, would become the youngest quarterback in NFL history to start three Super Bowls.

The players with the most games with at least three touchdown passes in a single postseason in NFL history:

The players with the most postseason receptions in NFL history:

With a win, Burrow, who was selected with the first overall pick out of LSU in 2020, will become the third quarterback selected in the first round of the NFL Draft to start a Super Bowl within his first two seasons in NFL history, joining Pro Football Hall of Famer DAN MARINO and BEN ROETHLISBERGER.

Burrow enters Championship Sunday after completing 28 of 37 attempts (75.7 percent) for 348 yards in the Divisional Round against Tennessee. On Super Wild Card Weekend against Las Vegas, he completed 24 of 34 attempts (70.6 percent) for 244 yards and two touchdowns.

On Sunday, Burrow can become the first quarterback ever to record a completion percentage of 70-or-higher in each of his first three career postseason games (minimum 25 attempts).

Burrow’s top target this season has been wide receiver JA’MARR CHASE, who recorded 1,455 receiving yards in the regular season, the most by a rookie in the Super Bowl era. After recording 109 receiving yards last week and 116 in the Wild Card Round, Chase’s 225 postseason receiving yards are the third-most ever by a rookie.

The rookies with the most postseason receiving yards in NFL history:

BRING IT HOME: When the LOS ANGELES RAMS host the NFC Championship Game at SoFi Stadium on Sunday, it will mark the first time in league history that a Championship Game will be played in the same stadium that will host that year’s Super Bowl.

With a win on Sunday, the Rams will become the second team ever to play in a Super Bowl in its home stadium, joining the TAMPA BAY BUCCANEERS, who won Super Bowl LV at Raymond James Stadium last year.

Either the Rams or their opponent this week, the SAN FRANCISCO 49ERS, will become the sixth team ever to play in a Super Bowl that was hosted in its home state.

The Super Bowls with a team playing in its home state:

Los Angeles quarterback MATTHEW STAFFORD is set to appear in his first-career Conference Championship. He ranked second in the league with 41 touchdown passes during the regular season in his first season as a Ram.

Stafford can become the fifth different quarterback in league history to record at least 40 regular-season touchdown passes and reach the Super Bowl in the same season.

The quarterbacks to record at least 40 regular-season touchdown passes and reach the Super Bowl in the same season:

The players to lead the league in receiving yards and reach the Super Bowl in the same season in NFL history:

With a sack on Sunday, Miller will become the fifth player since 2000 to record a sack in at least five consecutive postseason games.

The players with a sack in at least five consecutive postseason games since 2000: