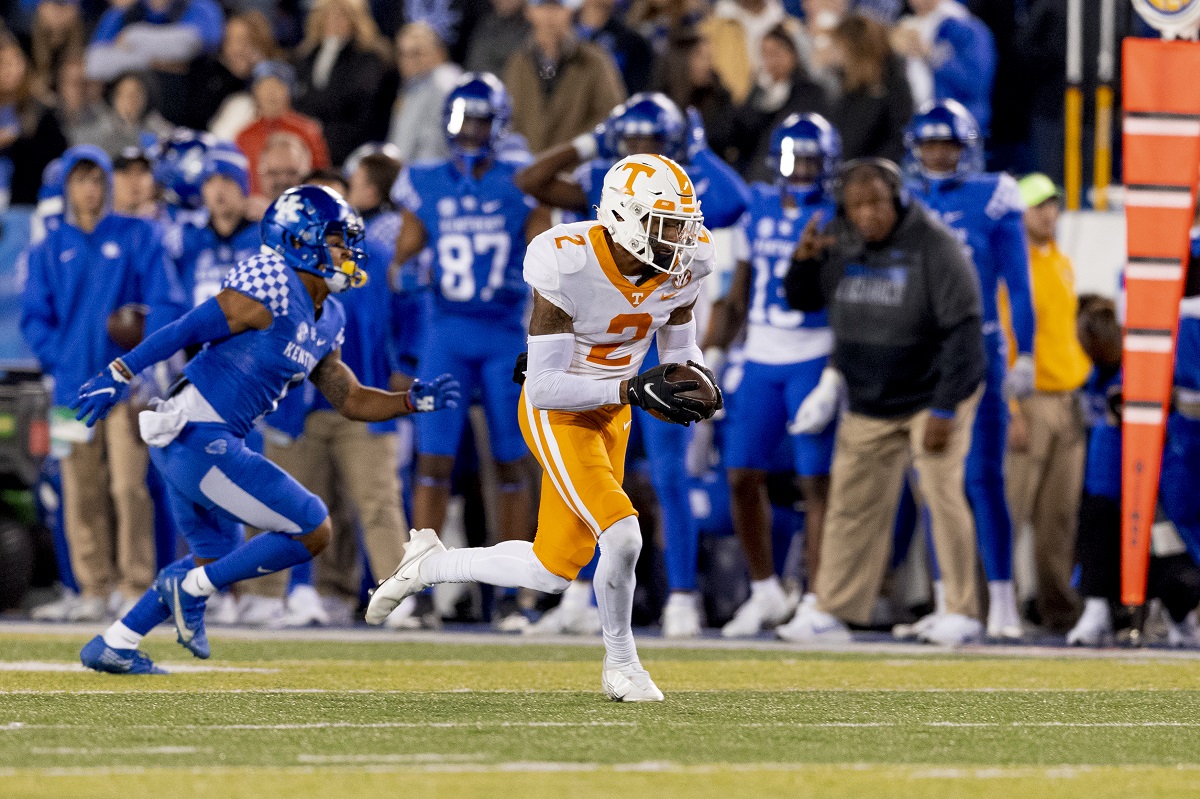 See how each of the 5 Vols selected in the 2022 NFL Draft fit with their new teams. Plus, you’ll find draft announcements, draft analyst breakdowns, team scout perspectives, first interviews with the media and more.

See the full list of Vols in the NFL HERE!

Vince’s View on Taylor’s fit with the Saints:

Taylor was already in a great spot with playing time opportunity in New Orleans. Now he gets to learn from one of the best, “The Honey Badger” Tyrann Mathieu, who signed with the Saints this week. Taylor is the second highest Saints draft pick among all the DBs. Only Marshon Lattimore (1st Rd in 2017) was a higher selection. Taylor’s versatility to play outside corner, slot CB or safety will be huge. The fact that he’s a 2nd Round pick helps him as well in what they’ve invested in him. I think he’d be in a great position to play each week regardless, including on special teams. The three starting spots outside are probably secure with Lattimore and last season’s 3rd Round pick, Paulson Adebo. Chauncey Gardner-Johnson is the likely slot CB. Taylor’s quickest path to playing time I believe is there and backup left cornerback where he’ll compete with his former Vols teammate Bryce Thompson. With PJ Williams, Bradley Roby and Daniel Sorensen bringing veteran depth at safety, that may be tougher to break through. Then again, vets will get cut in the off-season all around the league, so this group could reshape by Week 1.
Projection for early 2022 season: Backup on roster of 53

Vince’s View on Jones Jr.’s fit with the Bears:

Velus, arguably, landed where he’s needed and will be relied-upon the most. Despite adding wide receivers Equanimeous St. Brown (GB) and Byron Pringle (KC) to go with top returning receiver Darnell Mooney, the Bears had to upgrade overall. Plus, Slot WR was a big void. His competition there is 2021 6th round pick Dazz Newsome, Nsimba Webster and Kevin Shaa. I would expect Jones to be a big factor in the return game. However, on this Chicago team, he’s going to be so relied-upon on offense, they may go with one of the speedy backups to return kicks. It’s an interesting thing to track considering how much we talked about his return skills being so big. I personally think it would be foolish to not use him there. I just wanted to point out that some NFL coaches are reluctant to use starters regularly in the return game. It could be a based on the situation deal as well, like the Chiefs did with Hill, Saints with Kamara and others.
Projection for early 2022 season: Starting Slot WR & Part-Time KR/PR

From ESPN.com…
Here’s what Todd McShay wrote about the Bears’ 3rd-round pick:

“I love Jones’ upside. He’s a tad under 6-foot and is still refining his route running, but look at his speed and contact balance. He is a threat any time the ball is in his hands, with instincts and elusiveness in the open field and the breakaway speed to take the top off the defense. Jones’ 4.31 in the 40 ranked fourth among all participants at the combine and second among receivers, and he’s built like a running back.

Chicago can get the ball in his hands on quick slants and let him pick up extra yards. They can target him on deep shots. They can get him involved on sweeps. And they can use him in the return game, where he averaged 24.4 yards per kickoff return and 15.1 per punt return during his college career.

The Bears signed Byron Pringle and Equanimeous St. Brown this offseason, but they lost Allen Robinson II. This WR group is probably worse than it was last year, and it only had 176 catches from receivers then (No. 27). How is quarterback Justin Fields going to take the next step if the Bears can’t land him some reliable weapons in the passing game? Without a first-rounder, Chicago had to get creative, and the upside here is immense.“

VIDEO: Jones Jr. emotional when getting the draft phone call from the Bears

Vince’s View on Butler’s fit with the Raiders:

Butler to the Raiders was one of my top team fits for him. He has, and will, show a great appreciation for the history and tradition of the franchise. His aggressive, get-up field style he showed at Tennessee last season will fit perfectly. He was effective at UT without elite edge pass rushers. Now, if he gets into the rotation, he’ll have two of the best pas rushers in the league drawing attention in Maxx Crosby and Chandler Jones. There is some competition there at DT, at the moment, in the Raiders’ 4-3 front. Neil Farrell Jr. (LSU) was drafted in the 4th round. Former Bills DT Vernon Buter, VFL Kendal Vickers, former Titans DR Kyle Peko and Andrew Billings provide the roster competition for Big Matt. He’s tough, durable, extremely intelligent, highly motivated and a great leader. It’ll be quite nice to have a no-nonsense guy that doesn’t go out and party playing for you and avoiding the temptations of the home city. They’ll love him in Vegas.
Projection for early 2022 season: Backup on roster of 53

From ESPN.com…
Here’s what Todd McShay wrote about the Raiders’ 5th-round pick:

“The host city’s team didn’t pick until the end of Round 3 (due to the Davante Adams trade, which I’m sure it will be OK with), but the fifth-round selection jumped out to me when looking back at the Raiders’ class. Butler fits with Vegas as a 3-technique (or perhaps 1-technique at 6-foot-4 and 297 pounds). He is sudden and shows quick feet against the run, but he will get home as an occasional pass-rusher on the interior, too. Butler isn’t overly explosive, but he did have five sacks last season and can be disruptive.

I had Butler at No. 144 on my board, so it was pretty solid value. And with Johnathan Hankins and Vernon Butler each entering the final year of their contracts, the Raiders could have a spot open on the interior of the line. For now, the Tennessee product could contribute in a situational role before developing into a full-time starter. Same goes for LSU’s Neil Farrell Jr., one of Las Vegas’ fourth-round picks.“

Here’s Josh and Swain’s interview with Matthew Butler this week after being drafted:

Vince’s View on Mays’ fit with the Panthers:

Mays’ versatility to play guard, center or tackle will help his case to either make the 53-player roster or at least be n the practice squad. With the limitations NFL teams have of just being able to carry maybe two backup OLs on a game-day roster, this would give Mays an edge, if he’s ready. Carolina has three past 6th Round draft picks on the roster, including guard Deonte Brown. The starting 5 is fairly solid with 1st Rd draft pick Ikem Ekwonu and returning starting Taylor Moton as the tackles with Pat Elflein, Bradley Bozeman and Austin Corbett in the interior. Cade’s biggest competition in the interior of the offensive line will come from Brown, former Bengals guard Michael Jordan (no, not that MJ,) Dennis Daley, Sam Tecklenburg and Mike Horton. A motivated, mature Cade Mays can have a long career. Cade taking responsibility to set the NFL example for his younger brother Cooper (Vols starting center) would help his drive to be great. Cade staying healthy, with all the injuries the dealt with at Tennessee, will also go a long way in shaping what type of career he ends up having.
Projection for early 2022 season: Backup on roster of 53

VIDEO: Mays gets the draft call from the Panthers

Vince’s View on Jackson’s fit with the Titans:

Jackson goes home to Nashville, which was so cool to see. I was told by a scout that he had a chance to be drafted and he had really grown to like Jackson more and more through the process. There are plenty of bodies right now in the secondary, but Jackson has a chance to play a role for this team because of his leadership, intelligence, and versatility. Jackson is the 8th Titans DB draft pick on the current roster. 6 of them have come in the last three drafts. Jackson’s best avenues to playing time are either SS competing with Jamal Carter to backup Amani Hooker or Slot CB competing with veteran Buster Skrine to backup Elijah Molden. Titans play-by-play voice Mike Keith told SportsTalk on 99.1 The Sports Animal that he thinks Jackson can have a role on this defense. I agree totally. Theo, like all the non-linemen UT guys, brings special teams ability to his resume.
Projection for early 2022 season: Backup on roster of 53