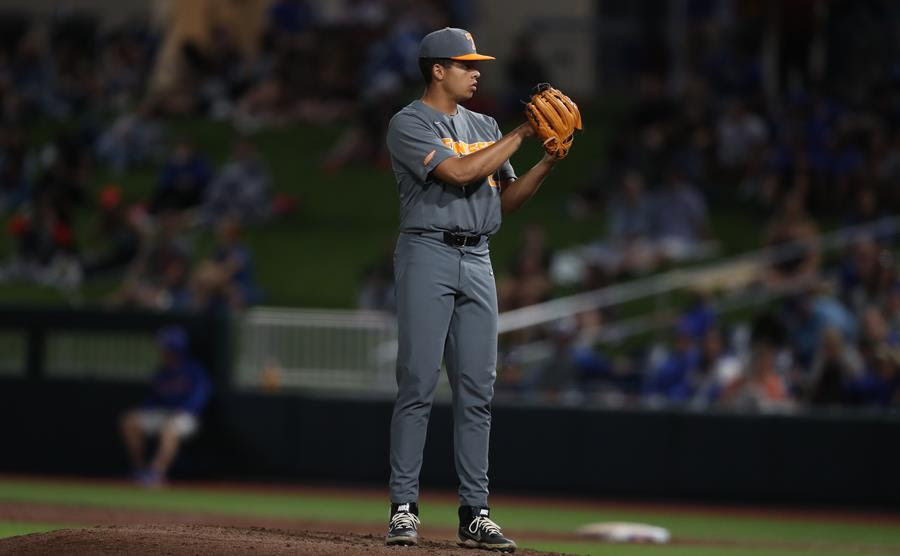 LEXINGTON, Ky. – No. 1/1 Tennessee struggled mightily at the plate on a gloomy Thursday night in Lexington, dropping the series opener at Kentucky, 3-2, in extra innings.

The Volunteers (41-5, 19-3 SEC) drew 12 walks but struck out 15 times and were able to muster just five hits while leaving a season-high 15 runners on base in a frustrating night at Kentucky Proud Park.

Jorel Ortega was one of the few bright spots offensively for the Big Orange, leading the team with three hits while also driving in a run. Seth Stephenson and Luc Lipcius were the only other Vols to record a hit in the game.

Chase Burns got the start and ended up with a no-decision after allowing two runs on six hits in four innings of work. The freshman right hander walked just one and had four strikeouts on the night.

Tennessee’s bullpen was rock solid after Burns’ exit, tossing 8.2 shutout innings before surrendering the game-ending run in the bottom of the 13th. Camden Sewell and Redmond Walsh did most of the heavy lifting, combing for 5.1 shutout innings to keep the game tied at two. Sewell did not allow a batter to reach base in 2.1 innings before Walsh went three scoreless frames and set a career high with six strikeouts.

Ben Joyce got a long fly out to strand a pair of runners in the 10th inning before being relieved by Mark McLaughlin in the 11th, who entered with a runner on second and no outs, but was able to get the Vols out of the jam with three straight outs to send the game to the 12th inning. The junior from Johns Creek, Georgia, was stuck with the loss after allowing one run on just two hits in 2.2 innings of work.

Kentucky closer Tyler Guilfoil was incredible for the Wildcats (25-20, 8-14 SEC), singlehandedly keeping them in the game with six shutout innings of relief. The junior right hander allowed just one hit and struck out four batters en route to earning his first win of the year.

A two-out triple down the right-field line by John Thrasher set the table for the game-winning hit, a single to shallow left field by Alonzo Rubalcaba one batter later to walk it off for the Cats in the bottom of the 13th inning.

The Vols jumped out to an early lead, taking advantage of a pair of walks by UK starter Ryan Hagenow to open the scoring in the top of the second. Ortega made the Wildcats pay for the free passes with a two-out RBI single to score Kyle Booker from second base and give the Big Orange an early 1-0 lead.

UT doubled its lead with another run in the third after being aided by some more Kentucky miscues. Following a catcher’s interference and an infield single by Lipcius, Booker walked to load the bases for Cortland Lawson, who also walked to drive in a run and make it 2-0. Unfortunately, the Vols were unable to do anymore damage, leaving the bases loaded for the third straight inning following back-to-back strikeouts by Stephenson and Ortega. Tennessee did not record another hit until an Ortega single to lead off the 11th inning.

A pair of Kentucky solo home runs in the fourth inning tied the game at two as Oraj Anu and Hunter Jump both went deep to give the Wildcats new life before eight consecutive innings of scoreless baseball by both teams.

Thrasher and Rubalcaba were the only UK players with multiple hits, finishing the game with two and three, respectively.

UP NEXT: The Vols will look to even the series tomorrow evening. First pitch is slated for 6:30 p.m. ET and the game will be streamed live on SEC Network+ and the ESPN app.

BULLPEN AT ITS BEST: On a rare night where the bats just couldn’t get it going, Tennessee’s pitching staff – specifically its bullpen – was lights out and kept the Vols in the game. The Vols’ relievers combined to allow just one run on six hits and three walks over 8.2 innings pitched.

RARE LOSS IN EXTRAS: With the loss, the Big Orange suffered just their second defeat in extra innings over the past two season. UT was 2-0 in extras this season heading into tonight’s game and went 6-1 in extra-inning games in 2021.