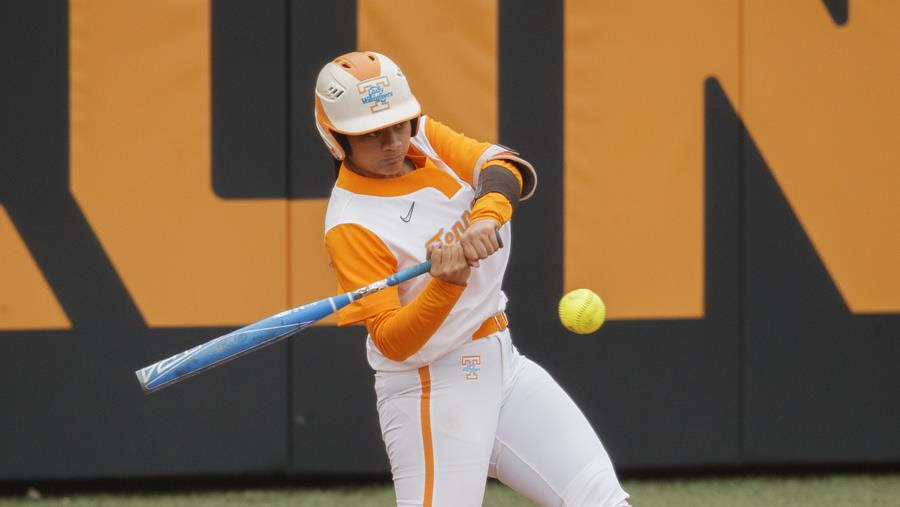 KNOXVILLE, Tenn. — No. 12 Tennessee softball took both games of a Saturday doubleheader against No. 16 Auburn to secure a top-4 seed and a double-bye to the SEC Tournament quarterfinals next week in Gainesville, Florida. The Lady Vols topped the Tigers 5-2 in game one before rounding the DH with a 7-4 victory featuring four home runs. The two wins secured UT’s fifth SEC series victory of the 2022 campaign.

Right-handed pitcher Ashley Rogers gave the Big Orange faithful a performance to remember after being recognized for her senior day prior to first pitch. The Athens product spun a complete game to open the twin bill with a two-run, four-hit outing against the Tigers. With the win, the Lady Vols (37-15, 14-8 SEC) locked up a top-4 seed in the conference for the sixth time since merging divisions in 2014 and the first time since 2019 when they finished second.

In game two on Saturday, Zaida Puni kept Tennessee’s chances at the SEC second seed alive, launching a pair of homers in the 7-4 win. The sophomore punished the Tigers (39-13, 11-12 SEC), going 3-for-3 with two home runs, four RBIs and two runs scored. The explosion was Puni’s first career multi-homer game and second four-RBI game this season. Puni also tied Kiki Milloy for the team lead in season homers at 14 each.

Super senior shortstop Ivy Davis left her mark on the games as well, going a combined 2-for-5 with two home runs, two RBIs, two runs scored and a walk.

Game 1 – Tennessee 5, Auburn 2
Seniors wrote the story of the doubleheader opener as UT defeated Auburn 5-2. Rogers earned her 56th win in the Orange and White, just one shy of tying Stephanie Humphrey and Caylan Arnold for seventh all-time in Lady Vol history. Her six strikeouts also brought her career total to 610 as she tracks down her pitching coach, Megan Rhodes Smith, for fourth all-time in the record book.

Fellow graduate senior Amanda Ayala created a scoring opportunity in the third, shooting a double down the right field line that ultimately scored freshman Lair Beautae on a bad throw home from the Auburn cut-off woman, bringing the margin of error to 2-0. In addition to the run, the double briefly gave Ayala sole possession of the team lead in doubles with 12.

Auburn clawed a run back off Rogers in the fourth inning after only mustering a single runner through the first three innings—including a stretch of nine-straight set down—but the Lady Vol ace forced a ground ball right back to her to strand runners at second and third and maintain the Tennessee lead. Tiger catcher Aubrie Lisenby knocked in AU’s first run with an RBI single to left, cutting Tennessee’s lead in half to 2-1.

Tennessee immediately responded by loading the bases with no outs in the bottom of the fourth. Milloy capitalized by lacing her 12th double of the season over a jumping left fielder to score Kelcy Leach and Shakara Goodloe and triple the lead to 4-1. The junior re-tied Ayala for the team lead in doubles and broke a tie with Puni for the team’s RBI leader at 48. The All-American center fielder’s two RBIs also gives her 14 multi-RBI games as the team heads closer to the SEC Tournament.

Davis put the game on ice in the fifth inning, hitting her third homer in the last four games with a solo blast to tie Puni for second on the team in the category at 12. An Auburn home run in the seventh slightly trimmed the lead to 5-2, but that was the only threat the Tigers posed over the final two frames of the game.

Game 2- Tennessee 7, Auburn 4
The Lady Vols concocted all the scenarios that put them at their most formidable—scoring first, in the first inning, while hitting more than two home runs and scoring more than six runs.

The Big Orange turned a double play in the top half of the opening frame into a two-run lead, giving them a crucial advantage early on. The team is 10-3 in SEC play when scoring first and 5-2 when those runs come in the first inning.

Ayala scored a runner the traditional way this game, singling up the middle to bring in Beautae for her second run scored of the day and Ayala’s 28th RBI of the season. Puni immediately brought Ayala home on the following at-bat, singling into the left-center field gap for the Lady Vols’ second run of the inning.

Lady Vol lefty Erin Edmoundson started game two and got off to an identical start as Rogers, holding Auburn to a single baserunner over the first three innings.

Like the first game, Auburn presented their greatest threat in the fourth inning. The Tigers were able to string together six-straight hits and double UT’s run total to take a 4-2 lead.

The Lady Vol offense, however, was more than prepared for the comeback task. Puni put the first dent in the Tiger lead in the bottom half of the frame, scraping a home run under the scoreboard in left center before Davis took the very next pitch over the dead center wall to knot the game at four runs apiece. Leach followed in her teammates’ footsteps and sent her fifth homerun into the porches in center for back-to-back-to-back homers and a 5-4 lead.

Edmoundson faced her last test in the fifth inning. With two runners in scoring position and only one out, she struck out one Tiger and popped the other out to second to emerge from the frame unscathed.

Puni greeted the new Tiger pitcher by reaching the Lady Vols magic number in the bottom of the inning, leaving no doubt on her second homer of the game and going past the bleachers in right center for a 7-4 lead. The two-run shot catapulted the sophomore into the team lead for RBIs, becoming the first Lady Vol to reach 50 this season.

Auburn offered no resistance over the final two innings and the Lady Vols improved to 14-8 in SEC play. A win tomorrow would give the program its most SEC wins since 2017 and back-to-back sweeps of the Tigers for the first time since 2012 and 2013.

UP NEXT: The Lady Vols take their five-game winning streak against the Tigers into the regular season finale with a lot on the line. A win on Sunday and an Alabama loss would give Tennessee the No. 2 seed in next week’s SEC tournament in Gainesville, Florida. First pitch is scheduled for 1:30 p.m. and can be seen on SEC Network+.