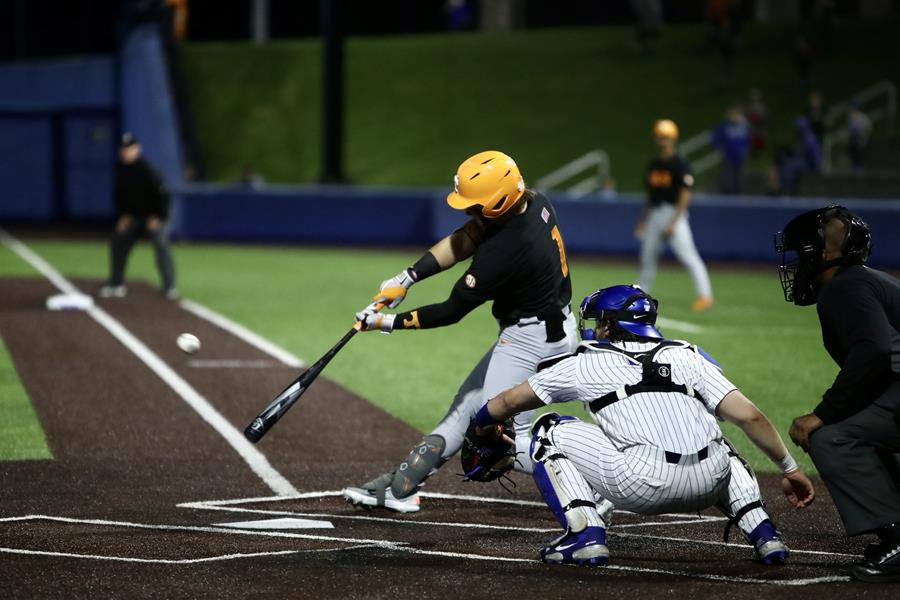 LEXINGTON, Ky. – Tennessee’s bats continued to struggle as the top-ranked Volunteers fell to Kentucky, 5-2, in Game 2 of its series against the Wildcats in Lexington.

The game was delayed an hour and 43 minutes before a pitch was even thrown due to lightning in the area on Friday night. The game was then suspended with one out in the top of the eighth because of heavy rain before being completed on Saturday afternoon. The Vols were trailing 4-2 when the game was stopped in the late hours of Friday night.

UT (41-6, 19-4 SEC) was unable to mount a comeback once the game was resumed on Saturday, giving the Vols their first series loss of the season.

Sophomore right hander Chase Dollander pitched extremely well out of the bullpen to keep UT within striking distance. The Georgia native allowed just one unearned run on two hits in four innings and finished with five strikeouts in his first SEC outing since getting injured against Alabama on April 16.

Drew Gilbert, Trey Lipscomb, Jorel Ortega, Evan Russell and Christian Moore each recorded one hit for the Big Orange, but those were the only five base knocks Tennessee as able to produce in the game.

The Wildcats (26-20, 9-14 SEC) jumped out to a 1-0 lead in the bottom of the second with a solo home run to left-center field by Ryan Ritter before adding two more runs in the third to pull ahead, 3-0, but the Vols responded immediately with two runs in the next inning to get right back in the game.

The Big Orange scored a pair of runs to chase UK starter Austin Strickland and cut the Kentucky lead to one in the top of the fourth. Jordan Beck walked to lead off the inning and scored all the way from first on an RBI double by Trey Lipscomb to get UT on the board. Jorel Ortega followed with an RBI double of his own down the right-field line to make it a 3-2 game. Tennessee had a chance to tie or even take the lead with runners on the corners and only one out, but a strikeout and long flyout ended the threat.

Kentucky made the Vols pay for an error in the bottom of the sixth, scoring an unearned run to extend its lead to 4-2. Daniel Harris IV reached on an error before coming around the score on a two-out double by Oraj Anu that one-hopped the wall in center field.

The Wildcats added another insurance run in the bottom of the eighth with an RBI groundout by Anu to give them a three-run lead heading into the ninth.

Junior reliever Zack Lee was able to quiet the Tennessee bats once again with 3.1 scoreless innings out of the pen, allowing just one hit and one walk to pick up the win.

Sean Harney pitched the final 1.2 innings for the Wildcats to pick up his first save of the year.

LIPSCOMB MOVING UP RBI LIST: With his double in the fourth inning, Trey Lipscomb drove in his 66th run of the season to move into a tie for ninth on UT’s single-season list with Todd Helton (1993) and Doug Hecker (1991). The Vols’ junior third baseman is the first Tennessee player to record 66 or more RBIs in a season since Cody Hawn had 81 in 2009. Lipscomb leads the SEC in RBIs this season.

ROAD STREAK SNAPPED: With the Game 2 loss, the Vols had their streak of consecutive road series wins snapped at 10. Tennessee had won nine straight SEC road series entering the weekend, including sweeps in all three prior road series this season.