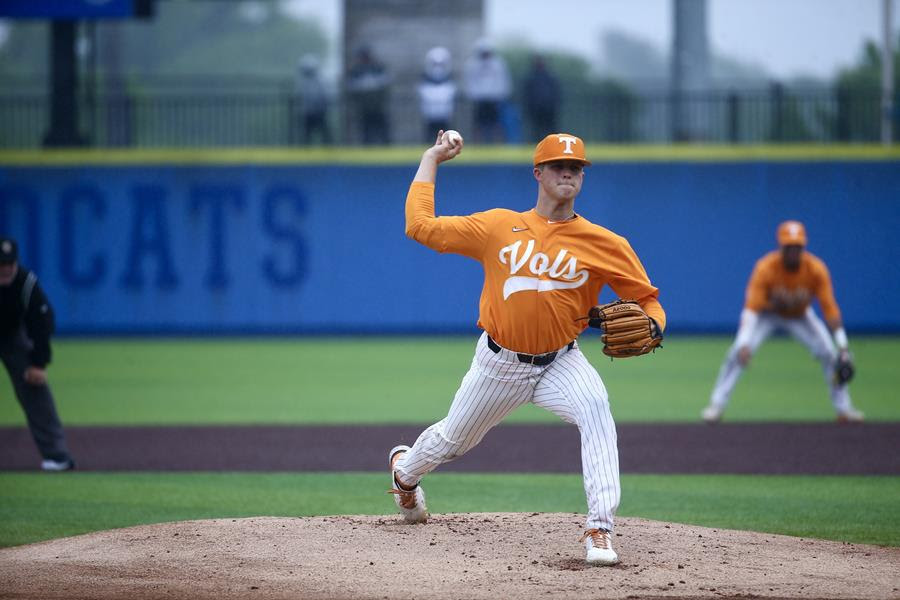 LEXINGTON, Ky. – Solid pitching and some timely hitting helped top-ranked Tennessee salvage a game in Lexington with a 7-2 victory over Kentucky in Saturday’s series finale on another rainy day at Kentucky Proud Park.

The pitching duo of Drew Beam and Redmond Walsh held the Wildcats to two runs (one earned) on six hits while the Big Orange bats busted out for seven runs on nine hits, including two homers, after struggling in the first two games of the series.

Seven different players recorded a hit for UT in the shortened seven-inning game, led by multi-hit efforts from Drew Gilbert and Cortland Lawson, who both finished with two hits and combined to score three times while also driving in a pair of runs.

The Vols (42-6, 20-4 SEC) wasted no time getting on the board, jumping out to a 1-0 lead in the top of the first thanks to a pair of hits by Jorel Ortega and Gilbert. Ortega singled up the middle with one out and came all the way around to score on a double to center field by Gilbert with two outs.

The Wildcats(26-21, 9-15 SEC) answered with a run of their own in the bottom of the third to tie the game at one after Alonzo Rubalcaba and Chase Estep started the inning with back-to-back doubles. Beam buckled down to record three straight outs following the doubles to limit the damage and keep the game tied heading into the fourth.

A solo homer off the bat of Lawson put Tennessee back in front in the top of the fifth. The Vols’ No. 9 hitter lined a ball over the fence in right field for his 10th big fly of the season to give the Big Orange a 2-1 lead.

Kentucky quickly responded with a run in the bottom of the inning to tie the game once again. Estep singled to lead off the inning, advanced to second on a failed pickoff attempt and eventually scored on a groundout by Jacob Plastiak to tie the game at two. Walsh did well to limit the Cats to just a single run in the inning after entering the game with runners on the corners and nobody out.

The Big Orange made the Wildcats pay for an error and a walk in the sixth inning, as Luc Lipcius came up with the biggest hit of the series for UT, driving in a pair of runs with a chopper that bounced over the first baseman’s head and into right field, giving the Vols a 4-2 lead.

Lipcius flashed the leather later in the inning, making a great defensive play to help Walsh get out of a jam in the bottom of the sixth to keep the two-run lead intact. UK threatened with runners on the corners and two outs, but Lipcius made a diving stop to snag a sharply hit ground ball before stepping on the bag at first for the final out of the inning.

Jordan Beck put the game away with a no-doubt, three-run blast to left field in the top of the seventh to give the Vols a five-run lead, which was plenty for Walsh, who retired the Wildcats in order in the bottom of the inning to finish off the win and improve to 3-1 on the year.

UP NEXT: Tennessee returns to the friendly confines of Lindsey Nelson Stadium for four home games next week, starting with a midweek contest against Bellarmine on Tuesday, May 10 at 6:30 p.m. before hosting No. 16/22 Georgia in another Thursday-Saturday series.

SIX VOLS WITH 10-PLUS HRs: For the first time in program history, Tennessee has had six players hit double-digit dingers in a season. The previous record was five, which the Vols accomplished this season and last year.

IMPRESSIVE SERIES FOR WALSH: Veteran lefty Redmond Walsh had arguably his most impressive series of the season after a rare blown save last Saturday against Auburn.

In two appearances against the Wildcats, Walsh tossed six scoreless innings while racking up eight strikeouts, including a career-high six over three innings in Thursday’s series opener. The Louisville, Tennessee, native allowed just three hits in those six innings, as well, holding Kentucky hitless in three innings of relief on Saturday afternoon.