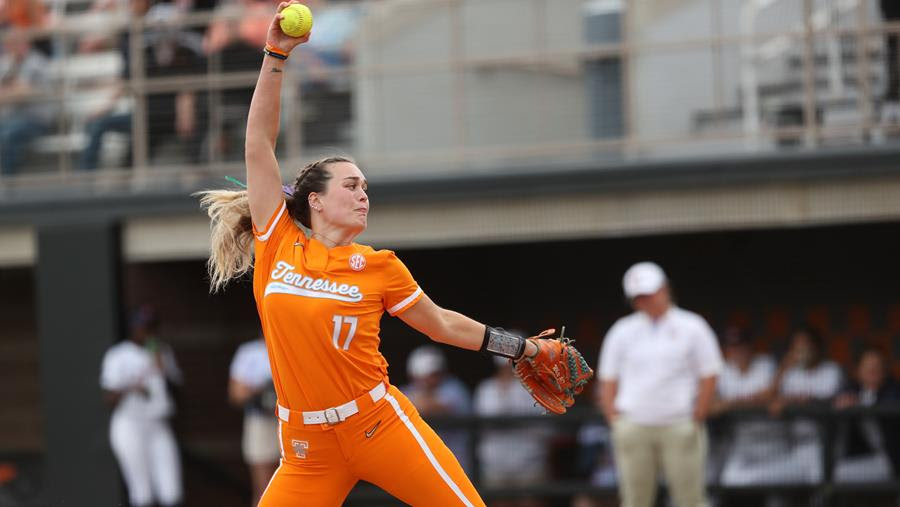 KNOXVILLE, Tenn. – No. 12 Tennessee did its part to clinch the No. 3 seed in the upcoming SEC Tournament, defeating No. 16 Auburn 3-1 Sunday afternoon at Sherri Parker Lee Stadium to complete a three-game sweep of the Tigers.

Sophomore Ryleigh White rounded out a weekend of strong pitching from the Lady Vols with a gem of her own. The righty sat down 19 of the first 20 Tigers she saw, including a span of 17 straight. White finished with a line of 6.1 innings pitched, three hits, one earned run and a strikeout. The win was the sophomore’s third of the season and improved her record to 3-2.

Scoring opportunities rarely presented themselves to either team, but Tennessee (38-15, 15-8 SEC) was able to capitalize on the few that did. With two runners on and only a single out in the fourth inning, Kelcy Leach singled up the middle to score Amanda Ayala to tally the game’s first run and put the Lady Vols out in front 1-0. Super senior Ashley Morgan gave the stingy Auburn righty Maddie Penta another blemish with her own single up the middle that scored Ivy Davis and doubled the lead to 2-0 through four.

Ayala hit her first homer since March 19th in the sixth inning, launching number five of the season off the scoreboard and giving White a cushy 3-0 lead to chase Penta from the game. The Lady Vols have now homered in each of their past 10 matchups and have only failed to homer in seven of their 53 games this season.

Super senior Erin Edmoundson came in with one out in the frame and secured her first save of the season by striking out the first Tiger she faced and forcing the other into a routine grounder to Davis at shortstop, securing the 3-1 win. With the performance, the Lady Vols remain undefeated when holding teams to less than two runs in SEC play at 7-0, and 3-1 in conference games decided by two runs or less.

UT’s three-game sweep of Auburn was Tennessee’s second in a row over the Tigers, marking the program’s first back-to-back sweeps over Auburn since 2012-13. It also went down as Tennessee’s second sweep in conference play this season after taking three games from Texas A&M April 16-18.

UP NEXT: With Sunday’s results around the league, Tennessee locked up the No. 3 seed in the SEC Tournament and will open the conference showcase on Thursday at noon ET in Gainesville, facing either No. 6 LSU or No. 11 Mississippi State. The quarterfinal matchup can be seen on SEC Network.