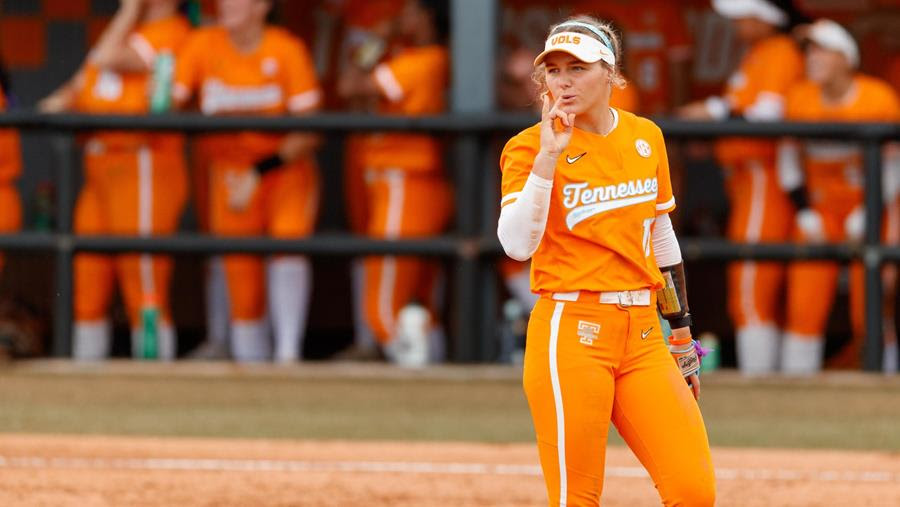 GAINESVILLE, Fla. — The 10th-ranked and No. 3 seed Tennessee Lady Vols will begin postseason play Thursday afternoon at the SEC Softball Tournament in Gainesville, Florida. UT will take on No. 11 seed Mississippi State in the league quarterfinals, with first pitch slotted for noon ET at Katie Seashole Pressly Stadium.

Thursday’s action will be televised on SEC Network with Kevin Brown (PxP), Amanda Scarborough (analyst) and former Lady Vol basketball standout Andraya Carter (reporter) on the broadcast. Voice of the Lady Vol softball team Brian Rice will be on hand for an audio broadcast, available for listening on UTSports.com, the Tennessee Athletics app and locally in Knoxville on AM 990.

DOUBLE-BYE SECURED: Rounding out the regular season with a three-game sweep over No. 16 Auburn, the Lady Vols locked up the three-seed in this week’s SEC Tournament. UT finished the regular season with a 15-8 record in conference play, winning five of eight series against league foes under the leadership of head coach Karen Weekly. Since 2014, the Lady Vols have finished top-four in the conference on six occasions.

SEC TOURNAMENT HISTORY: Tennessee has a 29-25 all-time record in the SEC Tournament with two titles coming in 2006 and 2011. UT last made the tournament final in 2015, falling to Auburn 6-5 in nine innings.

Last year, Tennessee reached the semifinal round of the 2021 SEC Tournament behind a pair of one-run victories over Texas A&M (3-2) and Arkansas (1-0). The Lady Vols walked off against the Aggies in nine innings thanks to a two-run double from shortstop Ivy Davis, then Ashley Rogers dealt a one-hit shutout for the Big Orange to top the Razorbacks and advance to the semis for the 16th time in program history.

LAST TIME OUT: The Big Orange closed out the regular season with a three-game sweep vs. No. 16 Auburn, its first sweep of a top-25 opponent since 2017. Dominant pitching was on display as the Lady Vols posted a 2.33 ERA with 14 strikeouts to one walk over the course of the series.

Super senior Ivy Davis continued her hot streak with a pair of homers in UT’s first two wins over the Tigers and led UT with a 1.842 OPS for the series. Zaida Puni also shined for Tennessee, mashing two home runs and four RBIs across the three games to add to her team lead in both categories at 14 and 50, respectively.

THE CASE FOR TOP 8: The Lady Vols find themselves in a solid position to earn a top-8 seed for the NCAA Tournament and receive valuable hosting privileges for the Regional and Super Regional rounds. UT checks in at No. 8 in the most recent NCAA RPI and holds the nation’s No. 1 strength of schedule at the end of the regular season.

Tennessee has eight victories over RPI Top 25 teams this season and 19 wins over opponents currently in the RPI Top 50. The Lady Vols also cracked the top-10 in the national rankings for the first time this season, coming in at No. 10 in Tuesday’s ESPN.com/USA Softball poll.

LOVIN’ THE LONG BALL: With six home runs last weekend vs. Auburn, the Lady Vols have hit 88 homers this year for the second-highest total in a single season in program history. It’s the most for UT since hitting a school record 100 dingers in 2015.

UT’s 1.66 home runs per game this year rank third in the SEC and 9th in the country. The Lady Vols have hit two or more homers in 23 games, touting a 21-2 record in those contests.

FREE BASES: The Lady Vols lead the SEC with a program-record 87 hit by pitch this season, led by career record holder Ashley Morgan who ranks third in the league with 18 HBP. Ivy Davis (16), Kiki Milloy (13) and McKenna Gibson (11) each sit inside the conference’s top 10 in HBP this season, and UT is the only program in the country with four players sporting 10-plus HBP in 2022.

Despite not having a single player in the conference’s top 10 in walks, Tennessee ranks fourth in the league with 187 free passes awarded this spring. Due in part to its significant number of hit by pitch and walks this season, the Lady Vols rank third in the SEC with a .402 team on-base percentage.

NOTING THE OPPOSITION: Mississippi State topped sixth-seeded and 18th-ranked LSU 7-4 in nine innings on Wednesday afternoon to advance to the SEC quarterfinals. Tennessee took two of three games against the Bulldogs earlier this season, mashing eight home runs between the two victories while Ashley Rogers earned both wins in the circle.

UP NEXT: The winner of Thursday’s game will advance to an SEC semifinal matchup on Friday at 3 p.m. that will be televised nationally on ESPN2.