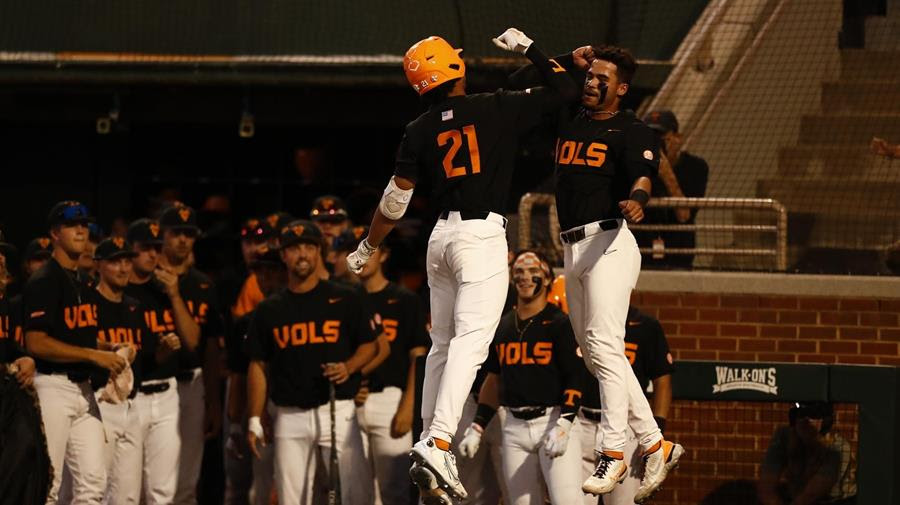 KNOXVILLE, Tenn. – Late home runs from Drew Gilbert, Trey Lipscomb and Blake Burke proved to be the difference Tuesday as No. 1 Tennessee defeated Bellarmine in a midweek meeting at Lindsey Nelson Stadium, 11-5.

Gilbert and Lipscomb both had three-hit, three-RBI outings for Tennessee (43-6), while the Vols had 14 hits as a team—their 25th game this season of double-digit hits. Overall, 10 different Vols accounted for hits on Tuesday.

On the mound, Kirby Connell (2-0) was credited with the win after 1.1 innings of work. Seven different players threw pitches for the Vols in Tennessee’s 12th midweek victory of the season.

With Bellarmine (11-36) having cut the Tennessee lead to just one run at 5-4, the Vols exploded for a four-run sixth inning to extend their lead to 9-4. All four runs came by way of back-to-back home runs from Gilbert and Lipscomb—Gilbert’s home run was a three-run shot to right-center that scored Christian Scott and Jorel Ortega, while Lipscomb immediately followed with a blast to left-center.

The Knights added one run in the seventh inning to draw within four at 9-5, but in the eighth inning, Burke gave Tennessee its third home run of the night with a two-run blast to center field that pushed the lead to 11-5.

Despite Tennessee gaining control early in the game, Bellarmine briefly had the lead in the top of the first inning, as leadoff hitter Matt Higgins hit the second pitch of the game over the right-center field wall off the scoreboard.

The Vols, however, quickly responded with two runs in the bottom of the inning and two more in the third inning.

In the bottom of the first, Seth Stephenson scored on a sacrifice fly from Jordan Beck and a two-out Lipscomb double drove in Luc Lipcius. In the third, the Vols’ two runs came via a Cortland Lawson RBI single and a wild pitch that Gilbert scored on from third base.

UP NEXT: Tennessee continues its five-game homestand, welcoming No. 22/NR Georgia to Knoxville for a weekend series starting Thursday night at 7 p.m. ET. Tickets are sold out, but the series opener will be broadcast on ESPNU with Friday night’s game on SEC Network.