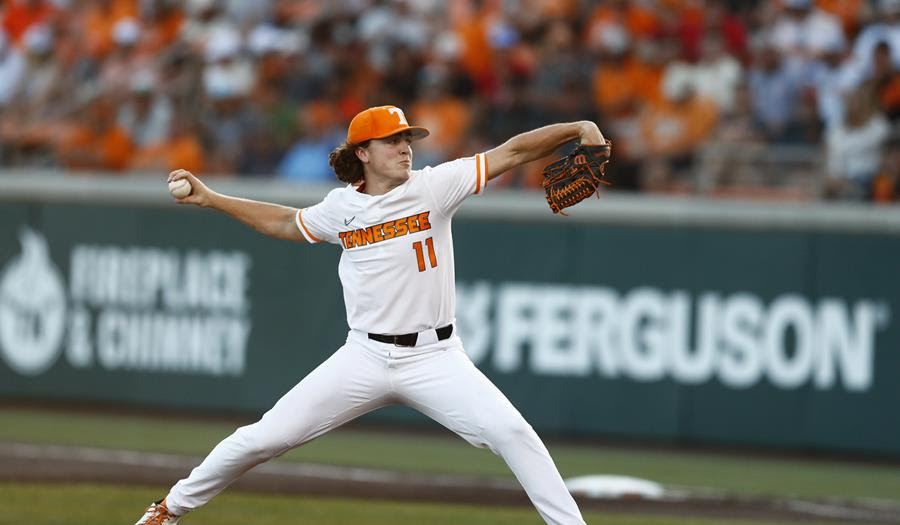 KNOXVILLE, Tenn. – A stellar start on the mound from Chase Dollander and three total Tennessee home runs—including two from freshman Blake Burke—led the top-ranked Vols to a 5-2 win over No. 22/NR Georgia in the series opener Thursday night at Lindsey Nelson Stadium.

Dollander earned his first series-opening start of the season and stifled the Bulldog offense in 6.0 innings of work—giving up one run on three hits and striking out six. The sophomore right-hander, who was making his first start of any kind since April 16, was credited with the win, improving his record to 7-0.

Redmond Walsh earned his sixth save of the season, retiring all four batters he faced.

Coming out of the bullpen for the first time this season was Chase Burns, who replaced Dollander and struck out three batters in 1.2 innings.

Burke’s two home runs—and three hits overall—led the way offensively for Tennessee. Seth Stephenson was the only other Vol to record multiple hits, registering a double, single and run scored.

Tennessee (44-6, 21-4 SEC) scored one run apiece in the second, third and fourth innings to take control of the game early—kickstarted by a Trey Lipscomb solo home run to left-center field.

Georgia (32-17, 13-12) quickly answered with its own solo home run in the top of the third inning from Cole Tate, but the Vols again tacked on one run in the bottom of the third on a Jordan Beck RBI groundout that scored Stephenson.

Burke continued the scoring with the first of his two home runs in the bottom of the fourth inning to extend Tennessee’s lead to 3-1, and three innings later added his second solo shot of the night—a blast over the right field wall that put the Vols in front by three runs.

Georgia narrowed its deficit to two runs at 4-2 in the top of the eighth inning, but Walsh entered the game and recorded a strikeout against the first batter he faced—stranding a runner at third base.

Tennessee added an insurance run in the bottom of the eighth, with Evan Russell’s single through the right side driving home a run from Drew Gilbert to give the Vols a three-run cushion heading into the ninth inning.

UP NEXT: The Vols and Bulldogs are back in action at Lindsey Nelson Stadium for game two of the weekend series on Friday at 5:30 p.m. Tickets are sold out, but standing room only tickets will be on sale starting 90 minutes before first pitch. The game will be televised on SEC Network.

LIPSCOMB REACHES 20: With his second-inning home run, Trey Lipscomb reached 20 home runs on the season—becoming the first Vol to hit 20 or more homers in a single season since Cody Hawn had 22 in 2009.

POWER-HITTING FRESHMAN DUO: With his two-homer performance on Thursday, Blake Burke now has nine home runs this season—equaling fellow freshman Christian Moore’s season-long home run total. Burke and Moore’s nine home runs are the most in a single season by a Tennessee freshman since 2008, when Kentrail Davis had 13 home runs.

WALSH NEARING TOP OF SAVES LIST: Thursday marked Redmond Walsh’s sixth save of the season and 22nd of his Tennessee career. Walsh is now just one save away from tying Todd Helton for the lead on Tennessee’s all-time career saves list.

ANOTHER PACKED HOUSE: Attendance for Thursday’s series opener was 4,580—tied for the eighth-largest single-game crowd in Lindsey Nelson Stadium history. Of the top 10 highest attended home games in program history, eight have come this season.