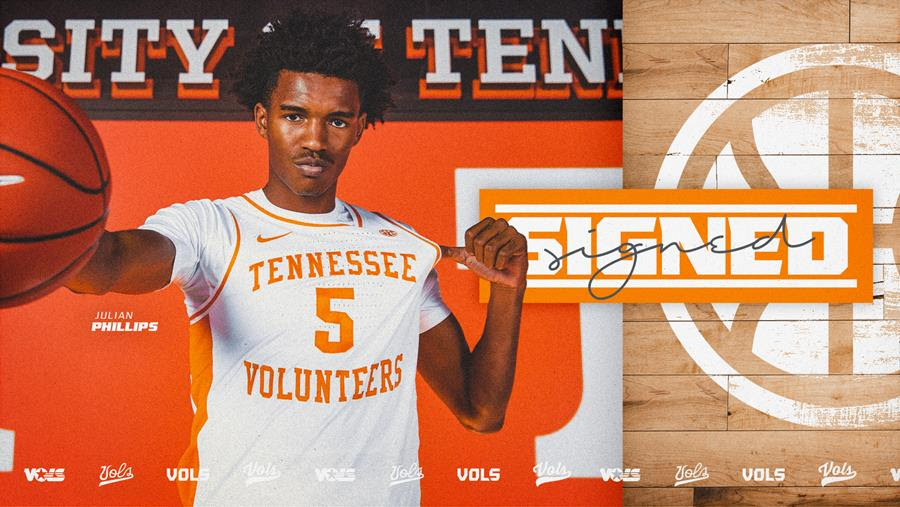 Hailing from Blythewood, South Carolina, Phillips currently attends Link Academy in Branson, Missouri. He plans to enroll at UT in June and aspires to major in Communications.

Measuring in at 6-8, 200 pounds, Phillips is the seventh five-star prospect and the fourth McDonald’s All-American to sign with Tennessee during the Barnes era.

“First of all, we love Julian and his family,” Barnes said. “He has the type of character and humility that we value in our program. Basketball-wise, his versatility and ability to impact the game in so many different ways is special. Julian is a three-level scorer, which is extremely valuable in our system. Defensively, we’re very excited about his combination of length and athleticism, as it enables him to effectively guard multiple positions. We expect Julian to blend into our current team nicely and make an immediate impact.”

In the most recent national ratings for the Class of 2022, Phillips was ranked as the nation’s No. 13 overall prospect by both ESPN and Rivals and No. 18 overall by 247 Sports.

In more than 17 minutes of action during the 2022 McDonald’s All-American game, Phillips scored nine points on 4-of-5 shooting, with three assists, two rebounds and a steal.

Link Academy ascended to No. 3 in the final 2021-22 USA Today Super 25 high school basketball rankings in April after the team compiled a 33-2 record and advanced to the championship game of the prestigious GEICO National Championships.
Phillips was his team’s top scorer in the national title game, totaling 16 points (33 percent of the Lions’ team total). He was coached at Link Academy by Rodney Perry.

Before transitioning to Link Academy, Phillips was a Class 5A All-State performer for coach Zeke Washington at Blythewood High School in Blythewood, South Carolina. Prior to his junior year at Blythewood, Phillips had already earned billing as the No. 1-rated player in South Carolina and the No. 15 small forward in the nation for the Class of 2022, according to 247Sports.

Phillips played his AAU ball with Upward Stars in the adidas 3SSB Series.

A perfect fit for the Volunteers, Phillips’ parents, Kim and Chamberlain, both served with and retired from the U.S. Army, relocating from Texas to South Carolina when Phillips was in elementary school so they could train at Fort Jackson.

Phillips is set to become just the fifth Tennessee basketball letterman from the state of South Carolina, joining a group that includes current wing Josiah-Jordan James.