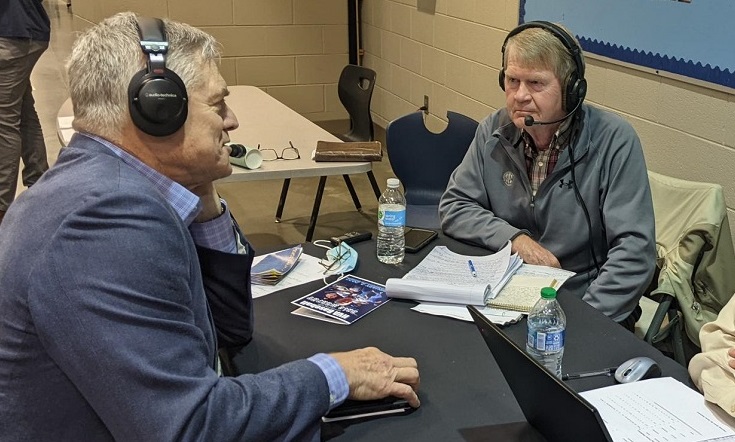 The Greater Knoxville Sports Hall of Fame, presented by First Horizon, proudly announces its class for the 41st Induction Ceremony.

The dinner and induction ceremony is set for Thursday, August 25th at the Knoxville Convention Center. Chipper Jones, an eight-time All-Star, the 1999 National League MVP, 2008 National League Batting Champion, and 2018 inductee into the National Baseball Hall of Fame will be the guest speaker. Hospitality begins at 5:30 p.m.; Master of Ceremonies Bob Kesling will make welcoming remarks before dinner at 6:30 p.m.; the induction ceremony begins at 7:30 p.m.

Jimmy Hyams – Media
Jimmy Hyams is sports director for 99.1 The Sports Animal in Knoxville, TN
where he is co-host of Sports Talk. During football season, he also co-hosts
Football Finals, the SEC Notebook and Sunday Sports Sound-Off. And he has
hosted a Golf Talk show for 22 years.

After 20-plus years as a sportswriter, Hyams changed professions in 1998 and
was named the 1999 Tennessee Sportscaster of the Year. He also won the
award in 2004.

Hyams has won the Tennessee Sportswriter of the Year award five times
(1991, 2000, 2007, 2016, 2018) and has won 50 statewide writing awards. He
is the only person in Tennessee to win the sportswriter and sportscaster of
the year awards.

Hyams is also a regular guest on the Sunday Sports Source TV show that airs
year round. He serves on six committees in Knoxville and he was a member of
the 2015 Leadership Knoxville class.

Having covered Tennessee football and basketball since 1985, Hyams has also
covered a variety of other sports, including golf and tennis. He wrote a book
about Peyton Manning in 1998. He is the SEC football editor for Lindy’s
magazine and writes a regular blog at his radio station.

Before moving to Knoxville in 1985, Hyams worked at several Louisiana
newspapers. He was sports editor of the Natchitoches Times at age 16. He
also worked for the Shreveport Times (1977-78) and Baton Rouge Morning
Advocate (1978-83). Hyams is a native of Natchitoches and a graduate of
Northwestern State University. He is married to Melanie Sharpe Hyams and
they have two daughters, Leslie (29) and Valerie (26).

Limited seating available. Visit www.gkshof.org for tickets. Purchase tickets for $200 each, or purchase a table of 10 for $2,000. All ticket and auction proceeds benefit Boys & Girls Clubs of the Tennessee Valley, which serves more than 6,700 youth and teens at 21 Club locations in Knox, Blount, Loudon, Claiborne, and Anderson Counties. www.bgctnv.org

About Boys & Girls Clubs of the Tennessee Valley (BGCTNV)
BGCTNV strives to provide a world-class Club experience that puts success within reach of every young person who walks through its doors, putting them on track to graduate from high school with a plan for the future. The organization provides a safe, caring environment for Club members during the summer and after school and offers more than 35 fun and educational programs covering a range of topics, including STEM, the Arts, Health & Wellness, Fitness Programs & Team Sports, and Summer Learning Loss Prevention. Serving more than 6,700 youth annually, BGCTNV is made up of 21 Clubs in Blount, Loudon, Anderson, Claiborne, and Knox Counties. For more information, visit bgctnv.org.