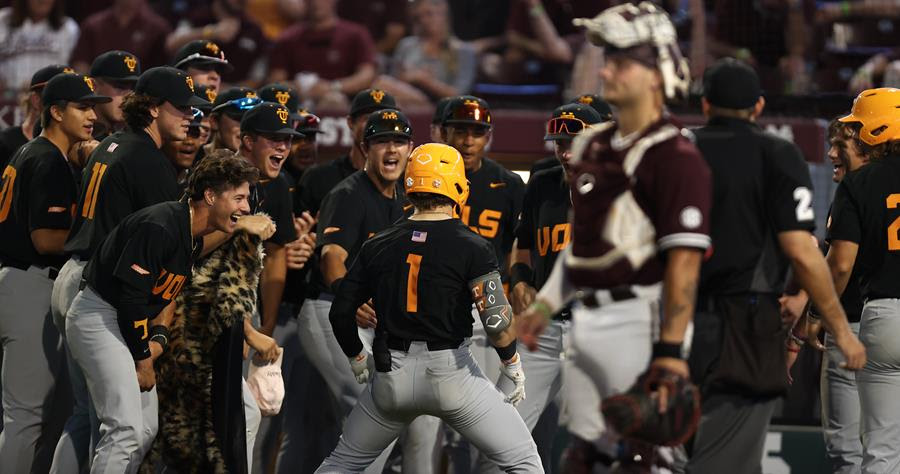 Tennessee (48-7, 24-5 SEC) used a three-run eighth inning to propell itself to victory, scoring all three runs with two outs in the frame. It started with a double from Luc Lipcius to the gap in right center. Jordan Beck followed that with an RBI single to left field before Gilbert delivered his heroic blast, a two-run go-ahead drive to the opposite field that just did escape the glove of Mississippi State left fielder Brad Cumbest.

The Vols offensive output was set up by a clutch and masterful relief outing from Blade Tidwell. Tidwell, who entered for Chase Burns in the seventh, came on with two runs already home and a runner on second with no outs. He proceeded to strike out three batters, two swinging and one looking, to keep the deficit at 3-1 and allow the Vols to go ahead just a half inning later.

Tidwell earned his second victory of the season and retired all nine batters he faced. The sophomore struck out five in three innings of work, primarily on an explosive fastball that topped out at 99 mph in the final pitch of the game.

Burns, starting after coming on in relief last week, posted a strong night for the Vols. The freshman from Gallatin, Tenn. went six-plus innings and allowed three runs. The right hander had allowed only one run through the first six frames, but gave up three-straight hits to start the seventh.

Mississippi State (26-29, 9-20 SEC) struck first on a solo home run from Hunter Hines to lead off the second. The strong start from Burns was matched by Bulldog starter Preston Johnson who, in similar fashion to Burns, turned in a terrific effort, but late runs spelled the end of his evening. The junior went 7.2 innings and tossed 113 pitches. The late offense touched up the right hander to the tune of four earned runs.

Seth Stephenson delivered the first clutch hit of the day, roping a single to center field to score Evan Russell. Russell jumpstarted the fifth-inning offense with a double to the wall in left.

UP NEXT: The Volunteers round out the weekend series and close the regular season facing Mississippi State in the series finale at 2 p.m. CT/3 p.m. ET on SEC Network+.

A DOZEN DUBS: Blade Tidwell earned his 12th career victory in the win. It was his longest perfect outing of the season as he fired a clean inning against Tennessee Tech on April 12.

ELEVENTH ALL-TIME: With the lone home run in the game, the Vols have now hit 130 big flies this season. That number ranks 11th in Division I history for team homers in a single-season. Tennessee is averaging 2.36 long balls per game, the fourth-best total in Division I NCAA history.