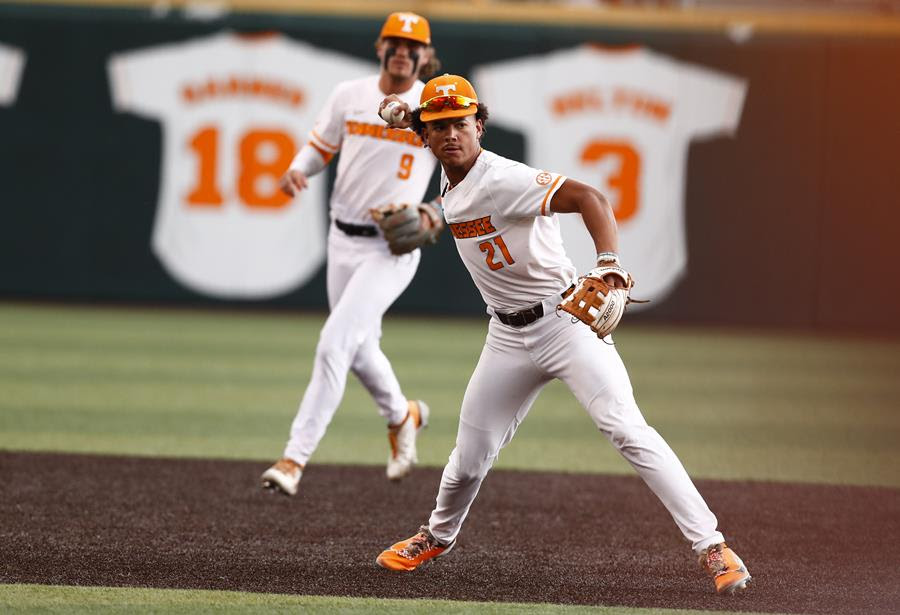 KNOXVILLE, Tenn. – No. 1/1 Tennessee had its 11-game win streak snapped by No. 6/17 Notre Dame in game one of the NCAA Knoxville Super Regional, falling 8-6 on Friday night at Lindsey Nelson Stadium.

The Fighting Irish (39-14) came out swinging, scoring runs in each of the first four innings to race out to a big lead. All eight of Notre Dame’s runs came via the long ball, as the Irish went deep four times on the night.

After falling behind 8-1, the Volunteers (56-8) chipped away with runs in four of the final six innings, scoring five unanswered to narrow the gap and get within striking distance, but ultimately came up just short.

The trio if Jordan Beck, Trey Lipscomb and Jorel Ortega led the way offensively with two hits apiece while also combining for four runs, six RBIs and three home runs – all solo shots. Despite solid offensive numbers from the aforementioned players, UT struggled mightily at the plate with runners on base, finish the night 1-for-16 with runners on and 1-for-10 with runners in scoring position.

Ben Joyce, Wyatt Evans and Camden Sewell were all solid in relief, holding the hot bats of Notre Dame scoreless over the final 5.1 innings of the game to keep Tennessee in the game. Joyce was the most impressive of the bunch, punching out five batters while allowing just two hits in 3.1 innings of work.

Four players had multiple hits for the Fighting Irish, led by a 3-for-4 performance from Jared Miller. Jack Brannigan added two hits and led the team with three RBIs.

Right-hander Alex Rao picked up the win for the Irish after 3.2 innings of relief of starter Austin Temple. Freshman lefty Jack Findlay secured his third save of the season after allowing one run but striking out three over the final two innings.

UP NEXT: Tennessee will look to bounce back on Saturday afternoon with its season on the line. First pitch for Saturday’s contest is slated for 2:06 p.m. and the game will be broadcast on ESPN. The Big Orange must win in order to keep their season alive, while a victory for the Irish would send them to Omaha for the College World Series.

STREAKS ENDED: Friday’s loss snapped an 11-game win streak for the Vols and was also the program’s first-ever loss in a super-regional game. UT entered the contest with a perfect 6-0 record in its three previous NCAA super regional appearances (2001, 2005, 2021).

BOUNCE BACK NEEDED: Tennessee is 3-2 following a loss this season and 1-1 in three-game series when dropping the opening game (won series vs. Alabama / lost series at Kentucky).