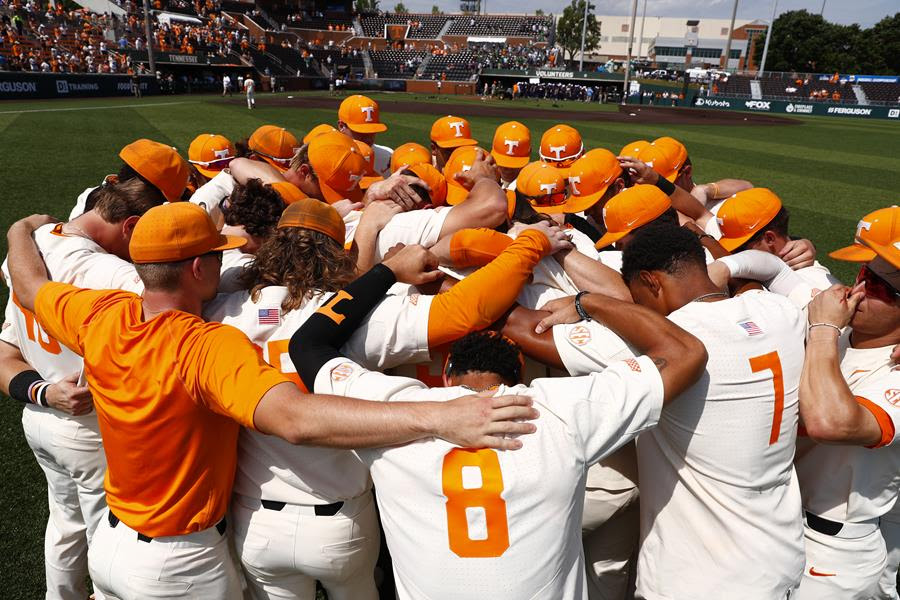 KNOXVILLE, Tenn. – An historic season came to a bitter end as top-ranked Tennessee was eliminated from the 2022 NCAA Baseball Championship following a 7-3 loss to No. 6/17 Notre Dame in the Knoxville super regional on Sunday afternoon at Lindsey Nelson Stadium.

The Fighting Irish (40-15) scored three runs apiece in the seventh and eighth innings to turn a 3-1 deficit into a 7-3 lead while holding the Volunteers scoreless over the final four innings to win the game and advance to the program’s third College World Series.

Leadoff man Seth Stephenson led UT at the plate as he was the only Vol to record multiple hits on the day, going 2-for-4 with a pair of big RBI base knocks in the second and fifth innings. Graduate senior Luc Lipcius drove in Tennessee’s only other run of the game with a solo home run in the bottom of the first give the Vols an early 1-0 lead.

Chase Burns got the starting nod and was masterful on the mound through the first six innings before running into trouble in the seventh. The true freshman allowed just one run on two hits entering the seventh and was one out away from escaping before giving up back-to-back homers to David LaManna and Jack Brannigan.

Notre Dame took advantage of an error to tack on three unearned runs in the eighth to increase its lead to four and essentially ice the game away.

Freshman left-hander Jack Findlay was the star for the Irish, tossing five shutout innings in relief to pick up the win. Findlay surrendered just one hit and allowed two walks while striking out four batters.

Tennessee (57-9) had not lost a game all year when leading after six innings (49-0) prior to Sunday’s contest. The Big Orange also struggled with runners on base, fishing the game 2-for-14 in such situations.

LIPCIUS FINISHES CAREER AS HR KING: Luc Lipcius’ solo blast in the first inning was the 40th and final long ball of his UT career, putting him atop of Tennessee record book for career home runs, one ahead of teammate Evan Russell (39).

The veteran first baseball hit a career-best 19 dingers this season, which is the seventh most in UT single-season history.

A SEASON TO REMEMBER: Despite falling short of Omaha, Tennessee had one of the best seasons in college baseball history, setting program records in victories (57) and home runs (158) while also winning the SEC regular season and tournament titles for the first time since 1995.