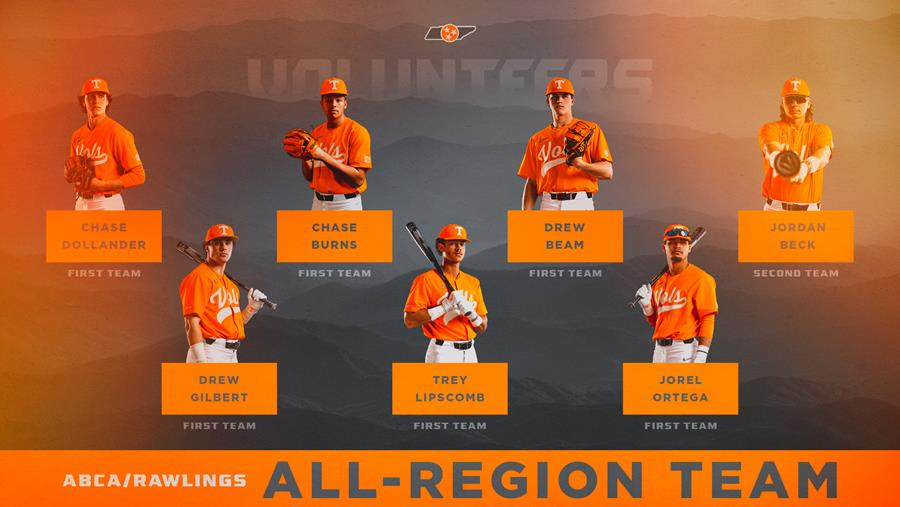 UT’s seven selections were the most of any school in the southeast region as the Vols placed six players on the first team and one on the second team.

The previous program record for all-region team honorees was five, which was set just last year when Chad Dallas (RHP), Jake Rucker (3B), Liam Spence (SS), Max Ferguson (2B) and Beck (OF) were all selected.

This year’s group of all-region picks helped lead the Vols to one of the best seasons in program history, which included program records for wins (57), fewest losses (nine), runs scored (613), home runs (158), RBIs (574), ERA (2.51) and strikeouts (695), to name a few. They also helped UT capture the SEC regular season and tournament titles for the first time since 1995. The Big Orange won the SEC regular-season title by six games, the largest margin in conference history.

The foursome of Lipscomb, Ortega, Gilbert and Beck combined to hit 69 of UT’s record-setting 158 homers and also drove in 276 runs. All four finished the year with at least 61 RBIs, ranking top four on the team in that category.

The pitching trio of Dollander, Burns and Beam made up UT’s weekend rotation for the majority of the season and dominated opposing hitters throughout the year, posting a combined record of 26-3. All three finished the year with ERAs under 3.00 while racking up 273 strikeouts. Dollander and Burns both finished with over 100 punchouts for the year while Beam held opposing hitters to a .186 batting average en route to winning SEC Freshman of the Year and Freshman All-America honors.

Dollander was tabbed a first-team All-American by Collegiate Baseball and became just the second player in program history to be named SEC Pitcher of the Year after recording a perfect 10-0 record in 16 appearances (14 starts).

To see the full listing of all the ABCA All-Region teams, click HERE.