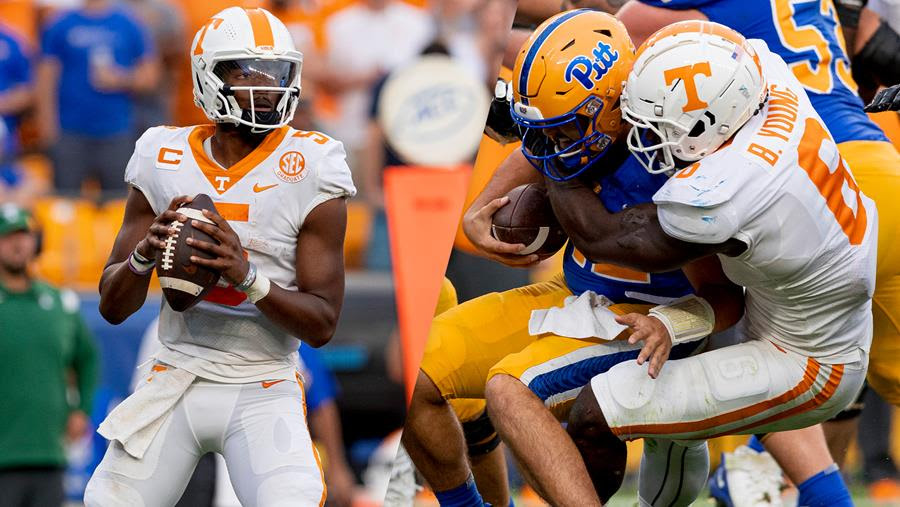 The duo of Hooker and Young helped lead the Vols to a huge victory over then No. 17 Pittsburgh, marking the program’s first non-conference road win over a top-20 opponent since defeating No. 6 Miami back in 2003.

Hooker accounted for 352 yards of total offense and two touchdowns to lead No. 24 Tennessee to a 34-27 triumph over the Panthers. The redshirt senior signal caller was 27-of-42 for 325 yards and two scores through the air, rallying the Vols from a 10-0 deficit. In the process, Hooker broke the school record for consecutive attempts without an interception, which now stands at 167 straight attempts without a pick. The Greensboro, North Carolina, native also moved into sole possession of second place in UT history for consecutive games with a touchdown pass with 14. Hooker came up clutch in overtime, stepping up in the pocket and firing the game-winning, 28-yard touchdown strike to Cedric Tillman.

The honor marks the second time that Hooker has been tabbed the SEC Offensive Player of the Week in his career after also earning the award on Nov. 8, 2021, following a road win over No. 18 Kentucky.

Young, a preseason first-team All-SEC selection, notched four tackles, a game-high two tackles for loss, a sack and a game-high three quarterback hurries to help lead an impressive defensive showing by the Big Orange. The senior edge rusher was disruptive all afternoon for a UT defense that registered 16 quarterback hurries on the day, its first double-digit output since producing 10 against Georgia State on Sept. 8, 2012. His sack came at a crucial moment in the fourth quarter on third down for a loss of six yards.

Young is the first Vol to win SEC Defensive Lineman of the Week honors since Kyle Phillips did so on Oct. 15, 2018.

Tennessee will be back at home in Neyland Stadium for its next two contests, hosting Akron this Saturday at 7 p.m. before an SEC showdown against rival Florida on Sept. 24. Get your tickets now at AllVols.com.