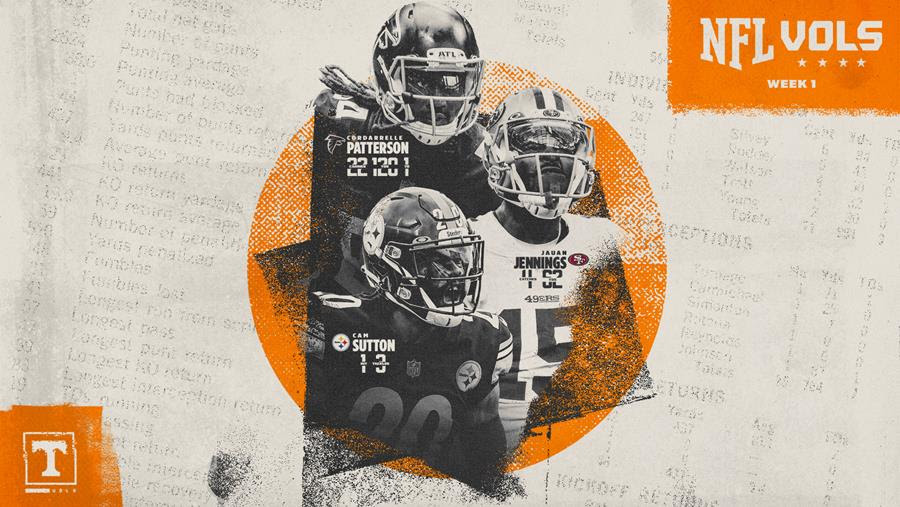 It was a strong opening weekend for former Tennessee Volunteers across the NFL.  Two VFLs set career-best marks while another made a clutch interception, highlighting the first week of play across the league.

Cordarrelle Patterson was masterful, kicking off his 10th season in the league. The Atlanta running back set a new career high in rushing yards, logging 120 yards on 22 carries. He also punched in a touchdown, his 15th-career rushing score. The 2022 season opener marked Patterson’s third career 100-yard rushing game, and he posted another 16 yards in the receiving game, hauling in three passes.

The featured back for Atlanta has blossomed in his role with the Falcons. Two of his 100-yard rushing games have come in the last two seasons as his previous career-best rushing day came on Nov. 28, 2021, when he had 108 yards at Jacksonville.

San Francisco’s Jauan Jennings also set a career-high on a rainy day in Chicago. The second-year man made a 44-yard reception early in the third quarter. It was the longest reception of his career, topping a 34-yard completion he made in the regular-season finale last season on Jan. 9 against the Rams.

On the other side of the ball, Cameron Sutton started the season with a bang for the Steelers, recording his first interception of the year halfway through the second quarter. The seventh-year defensive back has now made an interception in each of his last five seasons, and he added two passes defended and a pair of tackles in an overtime victory on the road for Pittsburgh.

A full recap of Vols around the league can be found below.

Ja’Wuan James – OL – Ravens
Graded as the Ravens’ top pass-blocker in the season-opener, according to PFF, making 24 snaps at left tackle and allowing no pressures or committing any penalties in his 63rd career start; injured

Jauan Jennings – WR – 49ers
Made four catches for 62 yards against the Bears, including a 44-yard completion, the longest catch-and-run of his career

Jakob Johnson – FB – Raiders
Tallied his first reception with the Raiders for one yard and played eight snaps, blocking on half of them

Cordarrelle Patterson – WR – Falcons
Had a career day on the ground, rushing for a career-best 120 yards and a touchdown on 22 carries. Added 16 yards through the air on three receptions