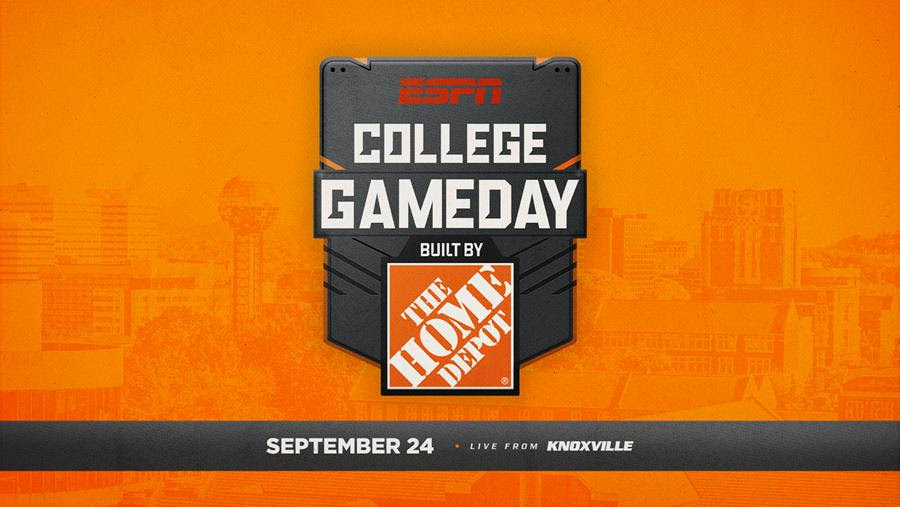 KNOXVILLE, Tenn. – For the first time since the 2016 season, ESPN College GameDay— college football’s longest-running and most celebrated pregame show­—will originate from the University of Tennessee campus as the Volunteers host Florida for their Southeastern Conference opener on Saturday in Neyland Stadium.

The show airs live on ESPN from 9 a.m. to noon ET Saturday. Live shots will also take place Friday for various ESPN programming and on Saturday morning’s SportsCenter prior to the show. The broadcast location will be announced soon.

Kickoff is set for 3:30 p.m. ET on CBS from a sold-out Neyland Stadium.

It marks the 10th time that Tennessee will host College GameDay and the 22nd time that the Vols have appeared on college football’s most popular pregame show.

Including this Saturday, the past three times that Tennessee has hosted College GameDay has been for a matchup with the Gators. The last occurred on Sept. 24, 2016, a game that saw the 14th-ranked Vols rally from a 21-0 deficit to beat 19th-ranked Florida, 38-28, as quarterback Joshua Dobbs accounted for five touchdowns.

Saturday marks the ninth Tennessee-Florida game that College GameDay has broadcast from. The series is tied for the third-most frequently visited matchup by the show, trailing only Alabama-LSU (11) and Ohio State-Penn State (11). Alabama-Georgia has also been a part of nine broadcasts.

No. 15/16 Tennessee is off to its first 3-0 start since the 2016 season. Led by sixth-year senior quarterback Hendon Hooker, the Vols own the nation’s fourth-highest scoring offense (52.0) and are third in the FBS in total offense (553.7).

No. 18/21 Florida enters the game with a 2-1 record following a 32-28 victory over USF on Saturday night in Gainesville.

Fans are strongly encouraged to arrive early and have their digital parking passes and tickets ready. Gate 21 Will Call opens at 11:30 a.m., and gates to Neyland Stadium open at 1:30 p.m.

Note: College GameDay was originally scheduled to originate from Baton Rouge, Louisiana, for No. 10 Tennessee at No. 4 LSU on Sept. 24, 2005, but the game was postponed to Monday, Sept. 26, due to the approach of Hurricane Rita.