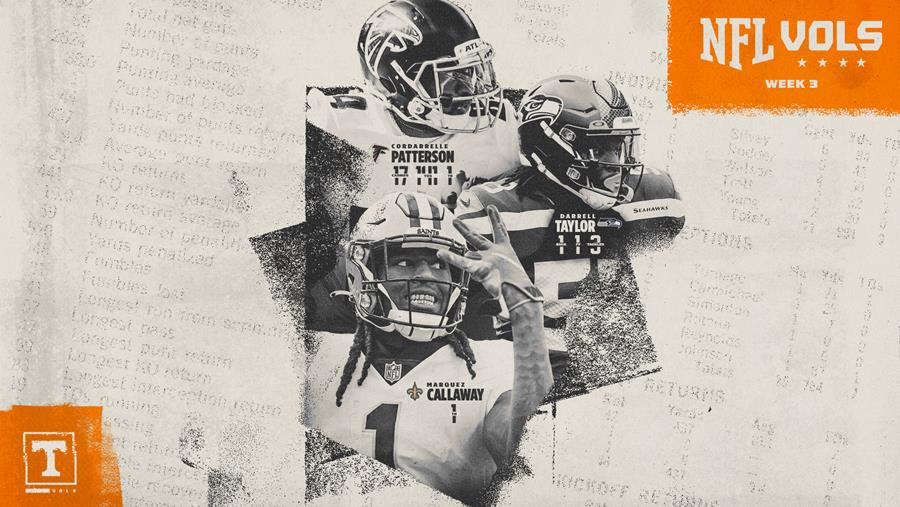 Week 3 for former Tennessee Volunteers in the NFL saw an incredible touchdown reception in the Carolinas, yet another career-record broken in the Pacific Northwest, and a big play in the backfield from a second-year standout.

Cordarrelle Patterson continues to find a new level to his game week-in, and week-out for the Atlanta Falcons. The 10th-year utility man has excelled as the featured back for the Falcons this season and shined again on Sunday, posting a career-high in rushing yards for the second time this season after doing so in Week 1 against New Orleans. Patterson currently ranks third in the league in rushing yards for the season with 302.

Patterson rushed for 141 yards on 17 carries, an average of 8.3 yards-per-touch, and scored a second quarter touchdown of 17 yards. The tailback had a long rush of 40 yards and notched a second half total of 107 yards on the ground. He was only targeted once in the pass-game, but made it count with a 12-yard pickup.

On the other side of the country, Marquez Callaway turned heads with an emphatic, acrobatic one-handed touchdown snare for the New Orleans Saints in the fourth quarter. It marked his first touchdown reception of the season and seventh of his career.

Darrell Taylor rounded out a strong day for former Vols in the NFL, posting a strip-sack of Falcons quarterback Marcus Mariota for the Seattle Seahawks.

VFL Matthew Butler made his NFL debut, collecting his first professional tackle for the Las Vegas Raiders, bringing down Titans running back Derrick Henry in the second quarter.

A full recap of Vols in the NFL from Week 3 can be found below.

Matthew Butler – DT – Raiders
Made his professional debut and first career tackle, taking down Derrick Henry in the second quarter

Alvin Kamara – RB – Saints
Tallied 61 rushing yards on 15 carries, including a 27-yard scamper and made a pair of receptions for 12 yards at Carolina

Joshua Palmer – WR – Chargers
Had a career day against Jacksonville, posting a career-high 99 yards on six catches,including his longest professional reception of 45 yards

Cordarrelle Patterson – WR – Falcons
Broke his career-high in single-game rushing yards for the second time this season, scampering for 141 yards on 17 attempts at Seattle. He dashed into the endzone once and averaged 8.3 yards per carry while catching one pass for 12 yards in a 27-23 road win

Darrell Taylor – DE – Seahawks
Tallied a sack-fumble of Atlanta quarterback Marcus Mariota in the third quarter for both his first sack and forced fumble of the year. Finished with three solo tackles for the Seahawks