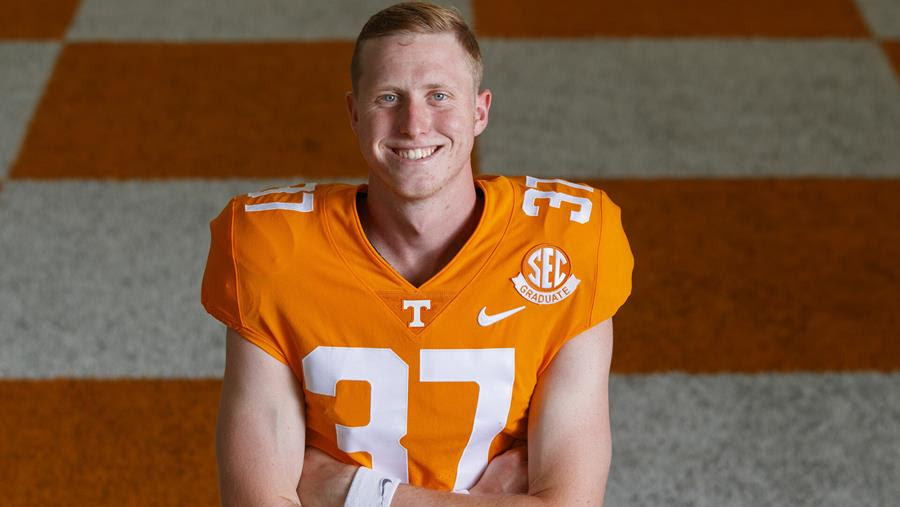 IRVING, Texas – Tennessee punter Paxton Brooks was one of 156 semifinalists named for the 2022 William V. Campbell Trophy on Wednesday, as announced by the National Football Foundation.

The Campbell Trophy, considered college football’s premier scholar-athlete award, recognizes an individual as the absolute best in the country for his combined academic success, football performance and exemplary leadership.

Brooks is in his fourth year as the Vols’ starting punter and also handles kickoff duties. He is in his fifth year with the program after electing to use his free COVID year to return to the program in 2022. Brooks was named to the Ray Guy Award preseason watch list and was a preseason All-SEC third team selection.

The Lexington, South Carolina, native has served as one of Tennessee’s team captains in three of their four games this season after doing so in seven games in 2021. Brooks is also one of the Vols’ best in the classroom, earning first-team CoSIDA Academic All-America honors following the 2021 season, UT’s first player to do so since Mike Terry in 1982. Brooks is a three-time CoSIDA Academic All-District honoree and has been named to the SEC Fall Academic Honor Roll three times, as well. He graduated Summa Cum Laude with a bachelor’s degree in kinesiology in May 2021 and is on track to earn a Master of Science in kinesiology-biomechanics in December.

Brooks was also a member of the prestigious VOLeaders Academy Class of 2020-21 and capped the year-long leadership program with a 12-day cultural exchange trip to Belize.

The full list of 2022 Campbell Trophy semifinalists can be seen HERE.

The NFF will announce 12-14 finalists on Oct. 26, and each of them will receive an $18,000 postgraduate scholarship as a member of the 2022 NFF National Scholar-Athlete Class Presented by Fidelity Investments. One of the finalists will be named the winner of the 33rd Campbell Trophy during the 64th NFF Annual Awards Dinner Presented by Las Vegas on Dec. 6 and have his postgraduate scholarship increased to $25,000.

This year marks the 64th year of the NFF National Scholar-Athlete Awards Presented by Fidelity Investments, which began in 1959, and the 33rd year of the Campbell Trophy, which was added to the program in 1990. Click here for more information on the NFF National Scholar-Athlete Awards and click here for more on the Campbell Trophy.