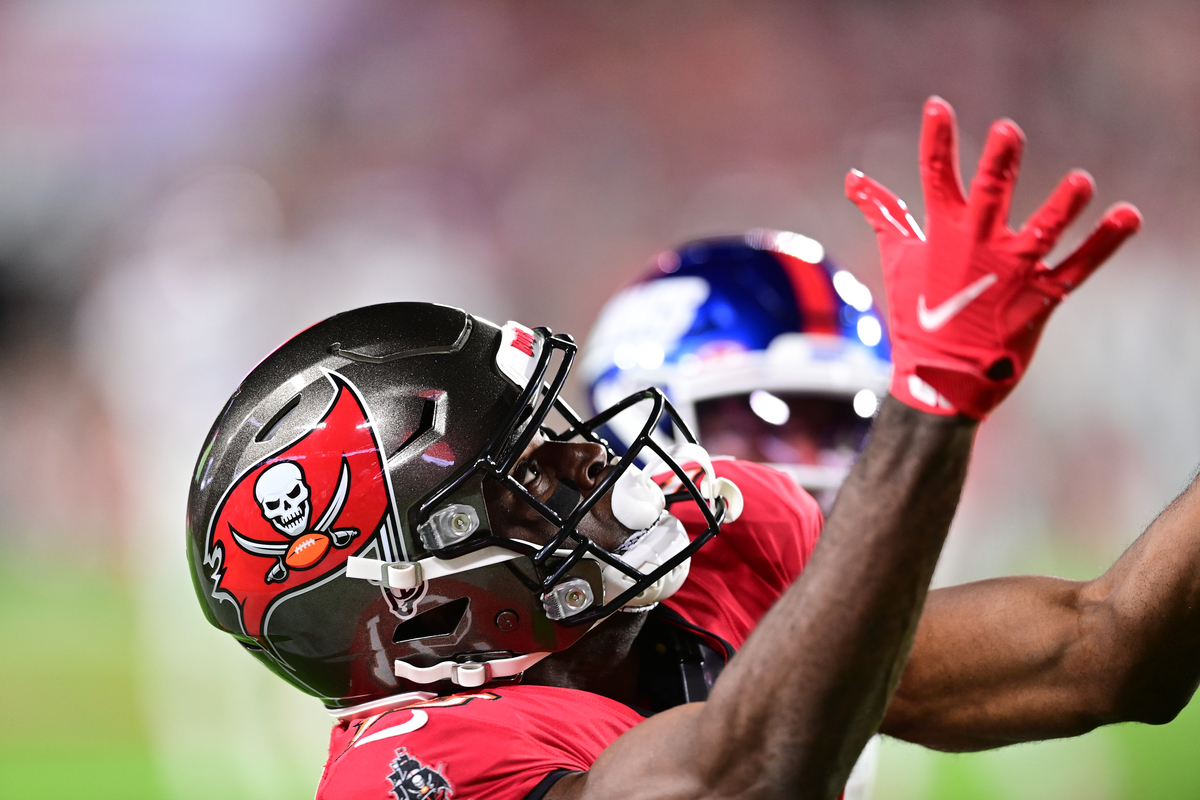 Below is the game schedule with my Week 7 NFL game predictions. Winners straight-up are in bold. The line is my pick against the spread.

Take a peek between shoulder pads into the offensive huddle of the NEW YORK GIANTS, courtesy of running back SAQUON BARKLEY.

Down 20-10 on Sunday with less than 13 minutes on the fourth-quarter clock, the ball at their own 25, what were the Giants thinking at that moment?

“Go score,” said Barkley, who leads the NFL with 771 scrimmage yards. “That’s the only thing we had in our mindset. Go respond. That’s the first thing that we said. There’s no panic in this team at all, not only the offense but defense and special teams. Great complementary football.”

And after New York’s 75-yard touchdown drive cut the lead to 20-17, the great complementary football came from safety JULIAN LOVE, whose interception set up Barkley’s go-ahead touchdown run with 1:43 remaining, and rookie KAYVON THIBODEAUX, whose ensuing sack and forced fumble iced the win.

The Giants (5-1) have erased 10-point deficits in three of their five wins this season – Barkley has the game-winning points in each of those three comebacks – but their comeback mentality isn’t uncommon. In 2022, there have been:

2.     NUMBER OF THE WEEK – 6: The combined wins of ATLANTA and CINCINNATI since Sept. 18. After each club opened 0-2, both teams have won three of their last four. The winner of Sunday’s game (1:00 PM ET, FOX) between the 3-3 clubs could be alone in first place in its division on Monday morning.

3.     THREE DEGREES OF SEPARATION: Put the coaching DNA of BILL BELICHICK under a microscope and there’s likely a lot of GEORGE HALAS, whose career-wins mark the Patriots’ head coach could surpass this week. That’s because the person who gave Belichick his first job as an NFL assistant in 1975, TED MARCHIBRODA, spent his formulative years as a coordinator (1971-74) under GEORGE ALLEN. And Allen, no doubt, learned countless lessons from Halas as a Bears assistant and coordinator from 1959-65. With a win when NEW ENGLAND (3-3) hosts CHICAGO (2-4) on Monday Night Football (8:15 PM ET, ESPN), Belichick would surpass Halas (324) for the second-most combined regular-season and postseason wins in NFL history. Only Pro Football Hall of Famer DON SHULA (347) has won more.

4.     SPOTLIGHT – INDIVIDUAL MATCHUP: Two of the game’s most exciting young players, rookie wide receiver GARRETT WILSON and second-year cornerback PAT SURTAIN II, will be on opposite sides when the NEW YORK JETS (4-2) meet DENVER (2-4) on Sunday (4:05 PM ET, CBS). Wilson leads all AFC rookies with 290 receiving yards and, since entering the league in 2021, Surtain is tied for third in the AFC with 19 passes defensed. Surtain, who is 99 days older than Wilson, was selected No. 9 overall in the 2021 NFL Draft while Wilson went No. 10 overall in 2022. And both have fathers who excelled in athletics. Surtain is the son of PATRICK SURTAIN, a former All-Pro cornerback. Wilson is the son of Kenny Wilson, a Davidson College Hall of Fame basketball player who once helped the Wildcats beat Mike Krzyzewski’s Duke Blue Devils.

6.     STREAK SPEAK: Seattle rookie cornerback TARIQ WOOLEN has four interceptions, tied with Buffalo’s JORDAN POYER for the NFL lead. Woolen, the latest on an impressive list of defensive backs drafted by Seattle on Day 3, began his college career as a wide receiver at Texas-San Antonio. Considered among the fastest active NFL players, Woolen clocked a 4.26-second time in the 40-yard dash at the combine in March.

7.     DID YOU KNOW?: When the NEW YORK GIANTS (5-1) visit the JACKSONVILLE JAGUARS (2-4) on Sunday (1:00 PM ET, FOX), DANIEL JONES and TREVOR LAWRENCE will square off for the first time since Nov. 17, 2018, when Clemson defeated Duke during the Tigers’ 15-0 College Football Playoff championship season. Jacksonville running back TRAVIS ETIENNE ran for two touchdowns in that game for Clemson. … After leading the 1996 Jaguars to the AFC Championship Game, former Jacksonville head coach TOM COUGHLIN then guided the Giants to two Super Bowl victories, in 2007 and 2011. Coughlin is one of two individuals ever to win multiple Super Bowls and lead franchises to both the AFC and NFC Championship Games as an NFL head coach. The other is Pro Football Hall of Famer BILL PARCELLS.

8.     UNDER-THE-RADAR STORYLINE: Last week, AUSTIN EKELER joined Pro Football Hall of Famer LENNY MOORE as one of two players ever to record 25 rushing touchdowns and 25 receiving touchdowns in their first six NFL seasons. Not only was Ekeler overlooked by every team in the 2017 NFL Draft, he also didn’t get a single Division I scholarship offer. Additionally, only one Division II school wanted him as a running back, Western State (Colo.). His younger brother, Wyett Ekeler, is a sophomore safety at the University of Wyoming, a program that has produced Bills quarterback JOSH ALLEN, Eagles safety MARCUS EPPS, Jaguars linebacker CHAD MUMA and Bengals linebacker LOGAN WILSON, among others. Ekeler and the LOS ANGELES CHARGERS (4-2) host the SEATTLE SEAHAWKS (3-3) on Sunday (4:25 PM ET, FOX).

9.     TREND TIME: The TENNESSEE TITANS (3-2) come off their bye to host the INDIANAPOLIS COLTS (3-2-1) on Sunday (1:00 PM ET, CBS). The Titans’ offense leads the league in red-zone efficiency (12 touchdowns in 13 possessions, 92.3 percent). In each of the past three seasons, the NFL’s most efficient red-zone offense during the regular season (Tennessee in 2019, Green Bay in 2020 and San Francisco in 2021) has advanced to the conference championship game.

11.  AND LAST BUT NOT LEAST: Could a trick play impact the Sunday Night Football game between PITTSBURGH (2-4) and MIAMI (3-3) at Hard Rock Stadium (8:20 PM ET, NBC)? A fake punt made a big difference when the teams met 50 years ago in the 1972 AFC Championship Game. His club needing a spark, Dolphins punter LARRY SEIPLE ran for 37 yards to set up a game-tying touchdown by LARRY CSONKA – one of 17 Pro Football Hall of Famers from that single contest – awakening Miami en route to a 21-17 win over the Steelers. Making the Dolphins’ road to a perfect season even more difficult, Miami had to travel to Three Rivers Stadium because, at the time, the NFL determined conference championship hosts with a rotational system. Pittsburgh had advanced to the game after its Immaculate Reception the week before. The Dolphins will celebrate the 50th anniversary of that perfect season on Sunday.

With a Patriots win against Chicago on Monday Night Football (8:15 PM ET, ESPN), Belichick will surpass Halas on the all-time wins list, with only Pro Football Hall of Famer DON SHULA (347) ahead of him.

The head coaches with the most career wins, including the postseason, in NFL history:

(KANSAS) CITY BY THE BAY: Since taking over as Kansas City’s starting quarterback in 2018, PATRICK MAHOMES leads the league with 20,443 passing yards and 168 touchdown passes. Through 69 career regular-season starts, he has compiled a 54-15 record, including a win in his first-career start in Week 17 of the 2017 season.

The quarterbacks with the most wins in their first 70 career starts in NFL history:

Mahomes’ top target this season has been tight end TRAVIS KELCE, who leads the league with seven touchdown receptions, leads tight ends with 41 catches and ties for the lead among tight ends with 455 receiving yards.

The tight ends with at least 50 receptions and 500 receiving yards in the most consecutive seasons in NFL history:

The tight ends with a touchdown reception in the most consecutive road games in NFL history:

RUNNING IN THE NORTH: Entering Week 7, Baltimore’s LAMAR JACKSON leads all quarterbacks with 451 rushing yards this season and has surpassed 50 rushing yards in each of his past five games.

With 49 rushing yards against Cleveland on Sunday (1:00 PM ET, CBS), Jackson will join CAM NEWTON as the only quarterbacks in NFL history to record at least 500 rushing yards in each of their first five seasons.

The quarterbacks with the most rushing yards in NFL history:

The Ravens will be facing a Cleveland offense that enters the week with the league’s top rushing attack, averaging 172 rushing yards per game. Running back NICK CHUBB leads the NFL with 649 rushing yards and seven rushing touchdowns.

With a rushing touchdown on Sunday, Chubb will become the fifth player ever to record at least eight rushing touchdowns in each of his first five seasons, joining Pro Football Hall of Famers JIM BROWN, EMMITT SMITH and LADAINIAN TOMLINSON, as well as ADRIAN PETERSON.

The players with at least eight rushing touchdowns in the most consecutive seasons to begin their careers in NFL history:

With a touchdown catch on Sunday, Cooper will become the sixth player in the Super Bowl era to record at least five touchdown receptions in each of his first eight seasons, joining GARY CLARK, MARQUES COLSTON, LARRY FITZGERALD and Pro Football Hall of Famers MARVIN HARRISON and RANDY MOSS.

PERFECT DUO: Miami wide receiver TYREEK HILL leads the league with 701 receiving yards this season, while teammate JAYLEN WADDLE ranks fifth with 533. Their combined 1,234 receiving yards are the second-most by a pair of teammates through their team’s first six games of a season in the Super Bowl era.

If Hill and Waddle combine for at least 166 receiving yards against Pittsburgh on Sunday Night Football (8:20 PM ET, NBC), they will become the fifth pair of teammates ever and third since the 1970 merger to combine for over 1,400 receiving yards through their team’s first seven games of a season.

The pairs of teammates to combine for the most receiving yards through their team’s first seven games of a season all-time:

Hill totaled 177 receiving yards last week, his third game this season with at least 10 receptions and 150 receiving yards and eighth such game in his career, surpassing Pro Football Hall of Famer CALVIN JOHNSON (seven games) and JULIO JONES (seven) for the most such games by a player in his first seven seasons all-time.

He can also join Pro Football Hall of Famers LANCE ALWORTH (871 receiving yards in 1968) and MARVIN HARRISON (853 in 2000) as the only players in the Super Bowl era with at least 850 receiving yards through their team’s first seven games of the season.

Seattle rookie cornerback TARIQ WOOLEN ties for the league lead with four interceptions this season and has recorded an interception in each of the past four games. With an interception at the Los Angeles Chargers on Sunday (4:25 PM ET, FOX), Woolen will join JAIRUS BYRD (2009) as the only rookies in the Super Bowl era to record an interception in five consecutive games.

The players with the most interceptions in their first seven career games since 1970: