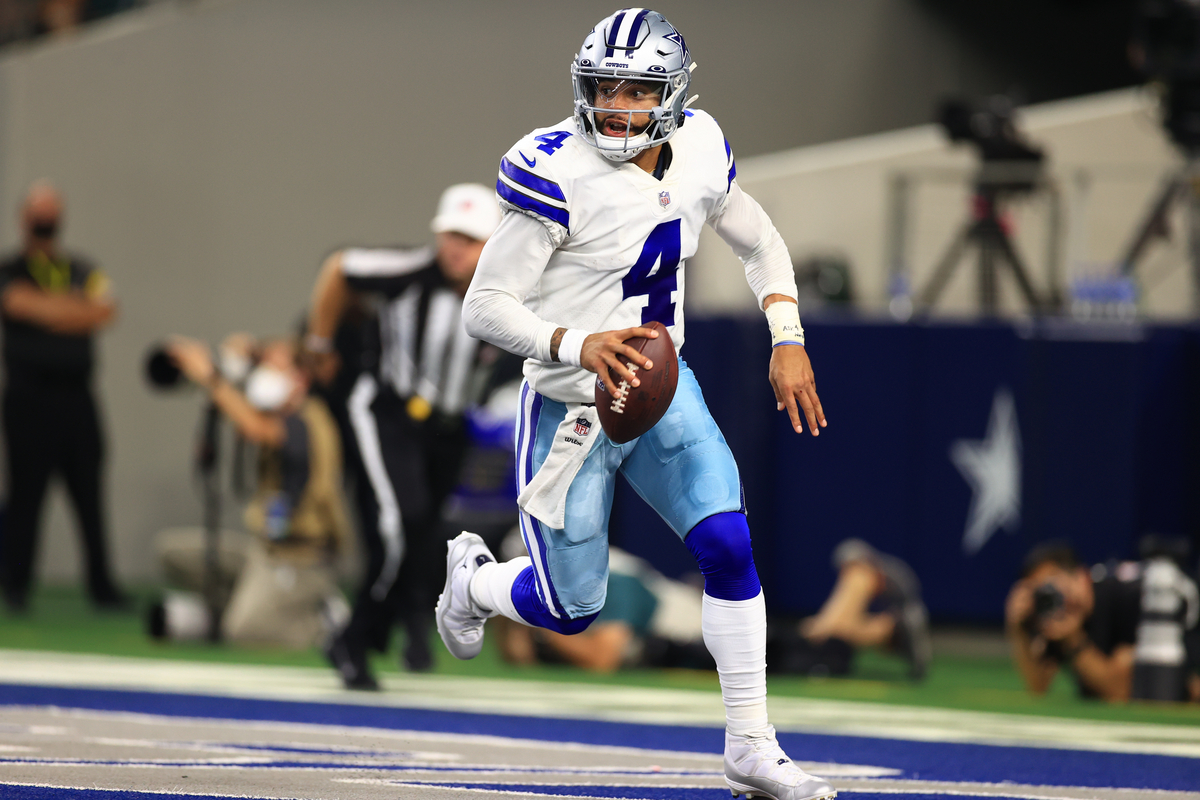 Below is the game schedule with my Week 8 NFL game predictions. Winners straight-up are in bold. The line is my pick against the spread.

Close games and comebacks continue to be calling cards of the 2022 campaign. No prior season in NFL history has had more games (84) that have been within one score (eight points) in the fourth quarter or decided by one touchdown or less (49 games in 1999 and 2022) through the first seven weeks. There have also been 34 games this year in which a team came back to win or tie after trailing in the fourth quarter, tied with the 2012 and 1989 seasons for the most ever through Week 7.

Three division leaders return from their bye week looking to resume their momentum as the league heads towards the midway point of the 2022 season.

The NFL’s last remaining unbeaten team and NFC East leading PHILADELPHIA EAGLES (6-0) look to match their best start to a season in franchise history (7-0 in 2004). One of the keys to the club’s start to the season has been ball control. Philadelphia leads the league in:

The BUFFALO BILLS (5-1), who lead the AFC East and possess the league’s top points margin (+95), host the GREEN BAY PACKERS (3-4) on Sunday Night Football (8:20 PM ET, NBC). The Bills are looking for their fourth win this season over a 2021 division winner, having previously defeated the Los Angeles Rams (Week 1), Tennessee (Week 2) and Kansas City (Week 6).

Atop the NFC North, the MINNESOTA VIKINGS (5-1) come off their bye having won four consecutive games, three of which featured a fourth-quarter comeback victory. Quarterback KIRK COUSINS has thrown a touchdown pass in 36 consecutive games and can surpass Pro Football Hall of Famer BRETT FAVRE (36 games from 2002-04) for the sixth-longest such streak in the Super Bowl era.

Also in Week 8, the third international game of the 2022 season will take place at Wembley Stadium in London between the DENVER BRONCOS (2-5) and JACKSONVILLE JAGUARS (2-5). The Broncos (six games) and Jaguars (five) are two of the nine teams this season who have played in at least five games with a final score margin of eight-or-fewer points.

Including 128 rushing yards against Indianapolis last week, Henry has rushed for at least 100 yards in nine of his past 10 division games. He has an NFL-record five career games with at least 200 rushing yards and multiple rushing touchdowns, including each of his past three games against the Texans.

5.     SPOTLIGHT – TEAM MATCHUP: The DENVER BRONCOS (2-5) and JACKSONVILLE JAGUARS (2-5) head to Wembley Stadium in London on Sunday (9:30 AM ET, ESPN+) in a matchup that features two of the five AFC defensive units allowing fewer than 20 points per game this season. Each club is led by a first-year defensive coordinator – the Broncos’ EJIRO EVERO and the Jaguars’ MIKE CALDWELL.

6.     STREAK SPEAK: Five teams enter Week 8 on a winning streak of at least four games as Philadelphia has opened the season with six consecutive wins and Minnesota, the New York Giants, the New York Jets and Tennessee have each won their past four contests. The last season in which five teams were each on a five-or-more game winning streak at the same time was 2017.

The Giants and Jets have each won their first four games in the month of October, the first time both clubs have been on a four-game winning streak at the same time since 2008 (Weeks 8-12). With victories in Week 8, both clubs can join the 2021 GREEN BAY PACKERS, 2019 SAN FRANCISCO 49ERS, 2017 PHILADELPHIA EAGLES and 2007 NEW ENGLAND PATRIOTS as the only teams since 2002 to go 5-0 in the month of October in a season. Each of the four previous teams to accomplish the feat finished the season as the No. 1 overall seed in their respective conferences.

8.     UNDER-THE-RADAR STORYLINE: When CLEVELAND (2-5) hosts CINCINNATI (4-3) on Monday Night Football (8:15 PM ET, ESPN), it will be a family affair as BILL CALLAHAN, Cleveland’s offensive line coach, and his son, BRIAN CALLAHAN, Cincinnati’s offensive coordinator, meet for the fifth time as division rivals since 2020.

The Browns rushing attack under Bill Callahan, who has been Cleveland’s offensive line coach since 2020, ranks second in rushing yards per game (149.8) and third in yards per rush attempt (4.98) over the past three seasons. Cleveland is one of five AFC teams to allow one-or-fewer sacks in four games in 2022.

Brian Callahan, Cincinnati’s offensive coordinator since 2019, helped the Bengals to a Super Bowl LVI appearance last season as the team ranks fifth in passing yards per game (264.8) and sixth in scoring offense (26.4 points per game) since the beginning of the 2021 season. The Bengals enter Week 8 ranked second in average time of possession (32:25) and third in third down efficiency (49.5 percent; 46 of 93).

9.     TREND TIME: Since 2017, head coach SEAN MCDERMOTT‘s first season with Buffalo, the Bills have won each of their three Sunday Night Football appearances, the only team with multiple wins and no defeats on Sunday night games over the past six seasons.

10.  THIS WEEK IN NFL HISTORY: October 28, 2007 (15 years ago) – The New York Giants defeated the Miami Dolphins, 13-10, at Wembley Stadium in London, England, in the first regular-season game played in London and the first regular-season game played outside of North America. The NFL continues the 2022 international slate in Week 8 as the DENVER BRONCOS (2-5) take on the JACKSONVILLE JAGUARS (2-5) at Wembley Stadium on Sunday (9:30 AM ET, ESPN+). The Jaguars have played in London in eight of the past nine seasons and return to Wembley Stadium for the first time since 2019.

FLYING TO HISTORY: The PHILADELPHIA EAGLES (6-0) return to action this week following their Week 7 bye. They are the last remaining undefeated team in the league and are looking to match their best start to a season in franchise history (7-0 in 2004).

Philadelphia leads the league with a +12 turnover differential and has a league-low two giveaways through their first six games. With no turnovers against Pittsburgh on Sunday (1:00 PM ET, CBS), the Eagles will become the second team in the Super Bowl era with two-or-fewer giveaways through their first seven games of a season, joining the 2017 KANSAS CITY CHIEFS (one giveaway).

The teams with the fewest giveaways through their first seven games of a season in the Super Bowl era:

The quarterbacks with the most rushing touchdowns in their first three seasons in the Super Bowl era:

SCARY GOOD DUO: Cincinnati enters Week 8 having won four of their past five games and have scored at least 30 points in each of their past two games. Quarterback JOE BURROW ranks second in the league with 2,097 passing yards and third with 15 touchdown passes, while wide receiver JA’MARR CHASE ranks sixth with 605 receiving yards and tied for second with six touchdown receptions.

Last week, Burrow and Chase connected on touchdowns of 32 and 41 yards. In their 23 games together as Bengals teammates, they have now connected on 11 touchdowns of at least 30 yards, tied for the fourth-most such touchdowns by a quarterback and wide receiver duo each under the age of 26 in NFL history.

The quarterback-wide receiver duos each under the age of 26 with the most 30-yard touchdown connections in NFL history:

MINNESOTA MILESTONES: Minnesota (5-1) enters the week sitting atop the NFC North, having won four consecutive games prior to their Week 7 bye. They rank fourth in the NFC with 242 passing yards per game, led by quarterback KIRK COUSINS and wide receiver JUSTIN JEFFERSON.

Cousins entered the year as one of three quarterbacks with at least 300 completions in each of the past seven seasons. In 131 games over his 11-year career, Cousins has totaled 2,976 completions. With 24 completions against Arizona on Sunday (1:00 PM ET, FOX), Cousins will tie DEREK CARR (132 games) as the third-fastest player in NFL history to reach 3,000 career completions. Only MATTHEW STAFFORD (125 games) and MATT RYAN (130) reached the mark in fewer games.

The players to reach 3,000 career completions in the fewest games in NFL history:

The players with the most games with at least 100 receiving yards in their first three seasons in NFL history:

The players with at least four touchdown passes in the most consecutive home games in NFL history:

When Tennessee travels to meet Houston on Sunday (4:05 PM ET, CBS), Henry will be facing an opponent that he has had historic recent success against. In his past three games against the Texans, Henry has totaled 673 rushing yards (224.3 per game) and seven rushing touchdowns. In each game, he has recorded at least 200 rushing yards and two rushing touchdowns.

The players with the most consecutive games with at least 150 scrimmage yards and a rushing touchdown in NFL history:

Adams has 37 receptions for 509 yards and five touchdowns this season, including at least one touchdown catch in each of his past three road games. Since entering the NFL in 2014, he ranks tied for first among active players in touchdown receptions (78), fourth in receptions (706) and fifth in receiving yards (8,630).

The players with at least 700 receptions and 80 receiving touchdowns in their first nine seasons in NFL history:

ROOKIE RUNNING INTO RECORD BOOKS: Seattle running back KENNETH WALKER ties for the lead among rookies with four rushing touchdowns this season and ranks third with 410 rushing yards. Over the past three weeks, he leads all players with 352 rushing yards (117.3 per game).

Walker has rushed for at least 85 yards and a touchdown in each of his past three games, including a 167-yard and two-touchdown rushing performance in Week 7, the most rushing yards by a rookie in a single game this season.

The rookies with at least 85 rushing yards and a rushing touchdown in the most consecutive games in NFL history:

TWO AT A TIME: Entering Week 8, Dallas linebacker MICAH PARSONS ranks second in the NFL with eight sacks and leads all players with four games with at least two sacks.

With two sacks against Chicago on Sunday (1:00 PM ET, FOX), Parsons will become the first player to record at least two sacks in five of his team’s first eight games of a season since 1982, when the individual sack became an official statistic.

Parsons, who is appearing in his 24th career game and led all rookies with three games with at least two sacks last season, can also surpass SHAWNE MERRIMAN (seven games) and ALDON SMITH (seven) for the most games with a least two sacks by a player in his first 25 games since 1982.

The reigning Associated Press Defensive Rookie of the Year enters Sunday with 21 career sacks and can surpass Merriman (22.5 sacks) and JOEY BOSA (22) for the fourth-most sacks by a player in his first 25 career games since 1982. Only Pro Football Hall of Famer DERRICK THOMAS (25), VON MILLER (24.5) and Smith (23.5) have more.

The players with the most sacks in their first 25 career games since 1982: