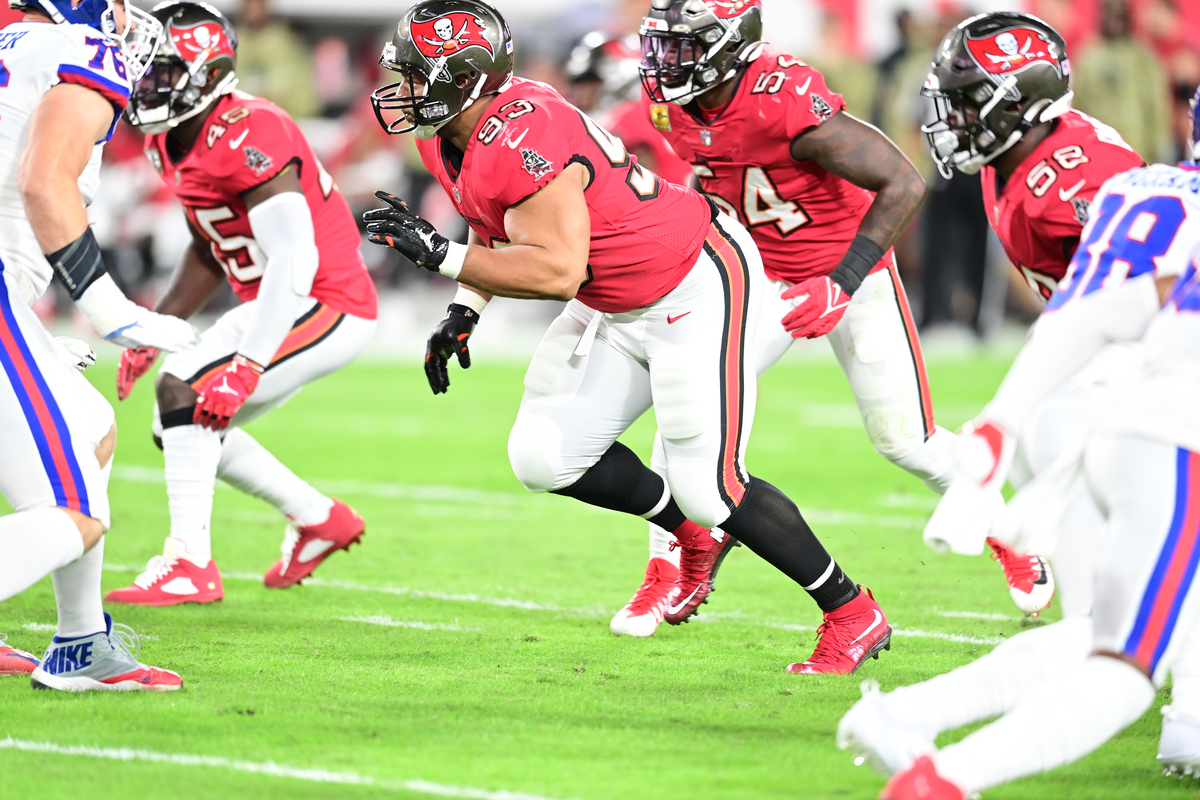 Below is the game schedule with my Week 10 NFL game predictions. Winners straight-up are in bold. The line is my pick against the spread.

The National Football League reaches a significant milestone in its 103-year history this week, playing its first regular-season game in a fourth country outside the United States.

When the SEATTLE SEAHAWKS (6-3) meet the TAMPA BAY BUCCANEERS (4-5) at Allianz Arena in Munich on Sunday (9:30 AM ET, NFL Network), the NFL will have played regular-season games in Canada, Mexico, the United Kingdom and Germany.

In February, following a competitive application process, the NFL selected Munich as the venue for two of the four International Series games to be played in Germany over the next four years. Frankfurt will also host two games.

This week’s Seattle-Tampa Bay contest is one of five international games in 2022, including a Monday Night Football game between San Francisco and Arizona in Mexico City next week, and three already played in the UK.

1.     JOHNNY UNITAS’ COLTS, 2022 EAGLES COULD SHARE REMARKABLE FEAT: The PHILADELPHIA EAGLES (8-0) lead the NFL in turnover ratio (+15) and takeaways (18) this season. This week, if they can finish their Monday Night Football game (8:15 PM ET, ESPN) with another positive turnover ratio, they’ll join the 1958 BALTIMORE COLTS as the only teams in NFL history to open a season with a plus-turnover margin in each of their first nine games. That year, the Colts beat the Giants in the NFL Championship Game, 23-17, in what most have called the greatest game ever played, the first sudden-death overtime contest in league history.

2.     NUMBER OF THE WEEK – 100: The number of career NFL sacks the Bosa family could reach this week. JOEY and NICK BOSA’s teams meet for the first time since the brothers entered the league when the LOS ANGELES CHARGERS (5-3) visit the SAN FRANCISCO 49ERS (4-4) on Sunday Night Football (8:20 PM ET, NBC), and the family (99.5) needs just one-half sack to reach 100. Joey Bosa has 59.5 career sacks in seven seasons for the Chargers. Younger brother Nick Bosa has 33 career sacks since entering the league in 2019. Their father, JOHN BOSA, registered seven career sacks from 1987-89 with the Dolphins.

4.     SPOTLIGHT – INDIVIDUAL MATCHUP: Arizona wide receiver DEANDRE HOPKINS over the past three weeks has 26 receptions, tied with TYREEK HILL for first in the NFL over that span, and ranks second behind Hill with 298 receiving yards. On Sunday at SoFi Stadium (4:25 PM ET, FOX), Hopkins faces a secondary that includes five-time Pro Bowler JALEN RAMSEY, who will play in his 100th NFL game. Since the beginning of 2021, Ramsey has broken up 25 passes. Only TREVON DIGGS (33) and JAMES BRADBERRY (28) have more in that time.

7.     DID YOU KNOW?: Sadly, Pro Football Hall of Fame punter RAY GUY passed away last week at age 72. Honoring the legacy of the three-time Super Bowl champion, those who have followed in his footsteps have collectively performed at an unprecedented level this season. In 2022, NFL punters are averaging 42.1 net yards per punt, the highest mark through Week 9 since 1976, when net punting became an individual statistic. NFL punters also are averaging 47.5 gross yards per punt, the best figure through nine weeks of any season since the 1970 league merger.

8.     UNDER-THE-RADAR STORYLINE: Since entering the league in 2020, Chargers quarterback JUSTIN HERBERT has 19 games with at least 300 passing yards, tied for the most in the league. With 300 passing yards at San Francisco on Sunday Night Football (8:20 PM ET, NBC), Herbert will surpass ANDREW LUCK (19) for the most 300-yard games by a player in his first three seasons in NFL history. Herbert has thrived under offensive coordinator JOE LOMBARDI. The NFL this month is honoring Lombardi, a graduate of the U.S. Air Force Academy who served a four-year tour of active duty, and all of our nation’s service members, veterans and their families in the annual Salute to Service initiative. Grounded in deep partnerships with military and veteran support organizations, Salute to Service seeks to honor, empower and connect with our nation’s military community. The military is an important part of Lombardi’s family. His grandfather, Pro Football Hall of Famer VINCE LOMBARDI, was as an assistant at the United States Military Academy under the legendary Earl “Red” Blaik from 1949-53.

9.     TREND TIME: Including the postseason, the Rams’ SEAN MCVAY against Arizona is 11-1 (.917), the best winning percentage by an active head coach against an opponent with a minimum of 10 meetings.

10.  THIS WEEK IN NFL HISTORY: Nov. 8, 1987 (35 years ago) – LAWRENCE TAYLOR records two sacks and intercepts the Patriots’ STEVE GROGAN at the New York 15-yard line with just over a minute remaining to preserve a 17-10 Giants victory. An eventual Pro Football Hall of Famer, Taylor highlights the first regular-season game in NFL history to air on the new medium of cable television. The ESPN broadcast booth on the historic occasion features Mike Patrick, Roy Firestone and Larry Csonka, with Chris Berman in the studio.

WELCOME TO GERMANY: When the SEATTLE SEAHAWKS (6-3) and TAMPA BAY BUCCANEERS (4-5) meet at Allianz Arena in Munich on Sunday (9:30 AM ET, NFL Network), it will mark the first NFL regular-season game played in Germany and the fourth of five international games on the 2022 NFL schedule. San Francisco and Arizona close out the international slate of games this season on Monday Night Football from Mexico City in Week 11.

With a start in Germany, Tampa Bay quarterback TOM BRADY will become the first quarterback to start a game in three different countries outside of the United States. Each of his three previous international starts came with New England, with one start in Mexico City (Week 11, 2017) and two starts in London (Week 7, 2009 and Week 8, 2012). Brady is 3-0 in international games and his 125.2 passer rating is the highest among all quarterbacks who have started multiple games outside of the United States.

The players with the most consecutive pass attempts without an interception in NFL history:

Since entering the NFL in 2014, Tampa Bay wide receiver MIKE EVANS ranks second among all players in touchdown receptions (78) and third in receiving yards (9,918) and is the only player in league history with at least 1,000 receiving yards in each of his first eight career seasons.

The players with at least 10,000 receiving yards and 75 touchdown receptions in their first nine seasons in NFL history:

Evans leads the Buccaneers with 44 receptions this season and needs six receptions to become the sixth player in NFL history with at least 50 receptions in each of his first nine career seasons, joining Pro Football Hall of Famer MARVIN HARRISON, ANQUAN BOLDIN, GARY CLARK, LARRY FITZGERALD and TORRY HOLT.

The rookies with the most consecutive games with a rushing touchdown since 1990:

FAMILY AFFAIRS: Among the matchups scheduled for Week 10, multiple members of the same families could meet one another in four different games.

Brothers DALVIN and JAMES COOK will meet for the first time in their careers in Buffalo (1:00 PM ET, FOX), brothers AMON-RA and EQUANIMEOUS ST. BROWN will face off in Chicago (1:00 PM ET, FOX) and cousins NICK and BRADLEY CHUBB square off in Miami (1:00 PM ET, CBS).

There have only been two occasions in the Super Bowl era in which two brothers each scored a touchdown in the same game: KEVIN and ANDRE DYSON on September 22, 2002 (Cleveland at Tennessee) and WILLIE and TERRY JACKSON on November 5, 2000 (San Francisco at New Orleans).

Additionally, JOEY and NICK BOSA can share the field on Sunday Night Football (8:15 PM ET, NBC) when the Chargers visit San Francisco. Along with their father, JOHN BOSA (seven career sacks), Joey (59.5) and Nick (33) have combined for 99.5 sacks as a family and can become the seventh family, in which each player had at least one sack, to reach 100 combined sacks since 1982, when the individual sack became an official statistic.

The NFL families with the most combined sacks since 1982 (minimum one sack each):

PATRICK STARRING: Kansas City quarterback PATRICK MAHOMES leads the NFL with 2,605 passing yards this season and in Week 9 became the first player in the Super Bowl era with at least 400 passing yards (466), 60 rushing yards (63) and both a touchdown pass and a rushing touchdown in a single game.

Since entering the NFL in 2017, Mahomes has nine career games with at least 400 passing yards and can become the first player with at least 10 such games in his first six career seasons in NFL history.

The players with the most games with at least 400 passing yards in their first six seasons in NFL history:

The players with at least one touchdown pass and one rushing touchdown in the most consecutive games in the Super Bowl era:

The players with the most consecutive seasons with at least 10 rushing touchdowns in NFL history:

RECORD SETTING RECEIVERS: Miami wide receiver TYREEK HILL leads the league with 76 receptions and 1,104 receiving yards this season, the most receiving yards by a player in his team’s first nine games of a season in the Super Bowl era, while Los Angeles Rams wide receiver COOPER KUPP, in eight games, ranks second with 72 receptions.

The players with the most receiving yards in their team’s first 10 games of a season in NFL history:

While the Rams have played one fewer game than the Dolphins due to an earlier bye week, Kupp isn’t far behind Hill.

Kupp, who has recorded at least eight receptions in six of his eight games this season, needs eight catches against Arizona (4:25 PM ET, FOX) to become the third player in NFL history with at least 80 receptions in his team’s first nine games of a season, joining MICHAEL THOMAS (86 receptions in 2019) and JULIO JONES (80 in 2015).

The players with the most receptions in their team’s first nine games of a season in NFL history:

FASTEST TO 4,000: Since entering the NFL in 2020, Minnesota wide receiver JUSTIN JEFFERSON leads all players with 3,883 receiving yards and has recorded 19 games with at least 100 receiving yards, tied with DAVANTE ADAMS and COOPER KUPP for the most such games over the past three seasons.

With at least 100 receiving yards at Buffalo (1:00 PM ET, FOX), Jefferson can surpass ODELL BECKHAM JR. (19 games) and Pro Football Hall of Famer RANDY MOSS (19) for the most such games by a player in his first three career seasons in NFL history.

The players to reach 4,000 career receiving yards in the fewest games in NFL history: