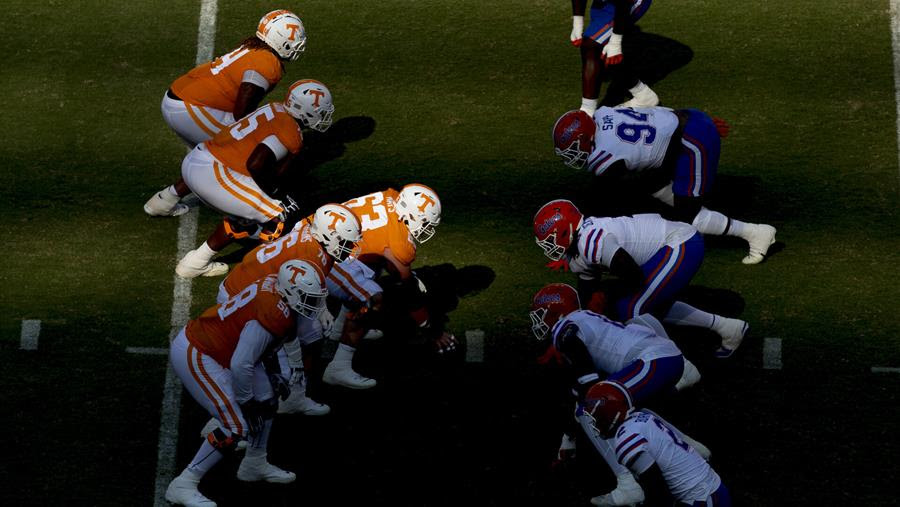 NEW YORK — The Foundation for Teamwork announced Tuesday afternoon that Tennessee’s offensive line is one of nine semifinalists for the 2022 Joe Moore Award, presented annually to most outstanding offensive line unit in college football.

Under the direction of second-year offensive line coach Glen Elarbee, the Volunteer O-linemen have been an imposing force in leading UT to a 9-1 record through the first 11 weeks of the 2022 campaign. The prolific Vols average 523.7 yards of total offense per game and score at a clip of 47.4 points per contest, both tops in the FBS through games played Nov. 12.

With the offensive line providing a clean pocket, the high-octane Tennessee Vols boast the nation’s best team passer efficiency rating (191.15) while leading the SEC and ranking second nationally in passing offense (348.2 yards per game). The Tennessee protection unit has also paved the way for 195.5 rushing yards per contest this season, ranking fourth in the SEC and 28th in the FBS.

The Vols returned four starters on the offensive line from last season and have seen the unit thrive on continuity. Jerome Carvin, Cooper Mays, Javontez Spraggins and Darnell Wright own a wealth of SEC experience in the trenches, while Gerald Mincey and Jeremiah Crawford have been sturdy in the rotation at left tackle this fall. Parker Ball, Dayne Davis, Jackson Lampley, Ollie Lane and RJ Perry have also provided quality snaps for one of the deepest, veteran offensive line rooms in the country.

Tennessee is the only program in the conference with four different players that have been SEC Offensive Lineman of the Week this season. Wright received the honor twice after his performances against No. 3 Alabama and No. 19 Kentucky, while Carvin (10/22 vs. UT Martin), Mays (11/12 vs. Missouri) and Spraggins (9/24 vs. No. 25 Florida) have each been recognized by the league office once this season.

The Big Orange put on an offensive clinic in its most recent outing, racking up a program-record 724 yards of total offense (460 passing, 264 rushing) during Saturday’s 66-24 Senior Day victory over Missouri. The 66 points scored were Tennessee’s most all-time against an SEC opponent, topping the previous standard of 65 set in a shutout at Vanderbilt in 1994.

The Joe Moore Award finalists will be named on Tuesday, December 6th. The eventual winner will be recognized in the ensuing weeks during a surprise, on-campus visit to the winning unit’s school.