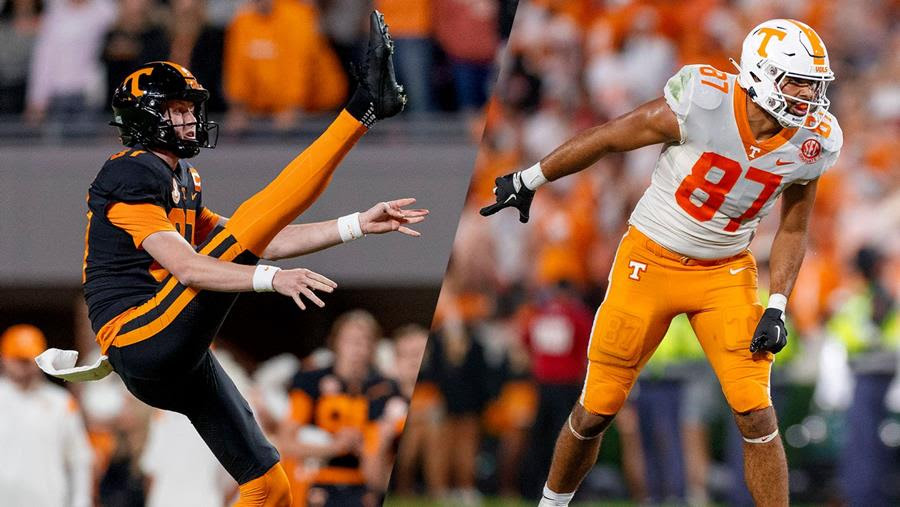 KNOXVILLE, Tenn. — College Sports Communicators (CSC) announced Tuesday afternoon that Tennessee football seniors Paxton Brooks and Jacob Warren have been named to the 2022 CSC Academic All-District Team, recognizing the nation’s top student-athletes for their combined performances on the field and in the classroom.

Brooks and Warren are two of 32 players from the Southeastern Conference on the Academic All-District list, and Tennessee has touted multiple honorees in each of the last four seasons. Brooks stands out as UT’s first four-time Academic All-District recipient, collecting the accolades every year since his sophomore campaign in 2019.

A veteran specialist and 2022 Ray Guy Award preseason watch list member, Brooks has played in all 11 games this season as Tennessee’s starting punter and primary kickoff specialist. He has attempted 26 punts for 1,039 yards (40.0 average) with nine pinned inside the 20-yard line and two boots of 50-plus yards, including a season-long 54-yarder against Missouri in his final game at Neyland Stadium. On kickoffs, Brooks has logged a career-high 79 attempts for 4,715 yards (59.7 average) with 25 touchbacks.

The fifth-year senior from Lexington, South Carolina, owns the school record with 59 career games played since 2018. A three-time member of the SEC Academic Honor Roll, Brooks completed his bachelor’s degree in May 2021 with a 3.91 grade-point average and currently holds a 3.83 GPA in grad school, working toward his master’s in kinesiology with a biomechanics concentration. He was recognized as an Academic All-American last fall, becoming the first Vol to earn first team distinction since Peyton Manning in 1997.

A fifth-year senior tight end, Knoxville native and 2021 Tennessee graduate, Warren collects his first career Academic All-District award after touting a perfect 4.0 GPA in his graduate program. The 2022 Wuerffel Trophy Nominee is currently pursuing a master’s degree in agricultural leadership, education and communication after rounding out his bachelor’s in kinesiology in May 2021 while maintaining a 3.63 GPA. He has been selected to the SEC Academic Honor Roll four years in a row.

Warren has played in all 11 games with seven starts at tight end in 2022, pulling in 12 receptions for 162 yards. He has a catch in each of his last four games for the Big Orange and touts a career-best 13.6 yards per reception this season, ranking fifth among tight ends in the SEC (min. one catch per game). For his career, Warren has appeared in 39 games with 18 starts and totaled 37 catches for 416 yards and four touchdowns.